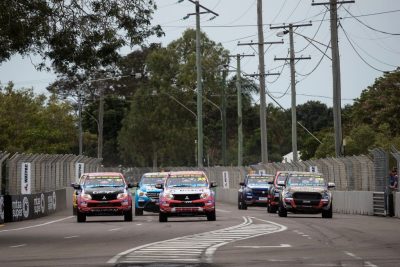 Team Triton has claimed their first Race Win, Pole Position, Round Podium from duo Craig Dontas & Elliot Barbour at the Townsville 400 over the weekend.

Barbour began his inaugural weekend in the SuperUte Series strong, topping both Practice 1 & 2 while Dontas finished P3 and P9, due to a fuel pressure problem which was fixed overnight.

In a one-two for Team Triton in Qualifying, Dontas took his first SuperUtes Pole Position ahead of Mitsubishi team-mate Barbour to lock out the front row.

Dontas claimed a maiden victory for himself and Mitsubishi’s Triton in the first race of the Townsville 400, leading from start-to-finish, making the most of his Pole Position, ultimately finishing 3.4 seconds clear.

Barbour was running second behind Dontas until his #87 Triton slowed on the second-last lap and was forced to return to the pits and finished P8.

With the whole field reversed from Race 1, Barbour started P3 and fought for P2 the entirety of the race.

Dontas started at the rear of the field and made his way through to fourth in his factory-backed Mitsubishi Triton by the Safety Car period.

Dontas’ rear axle broke at Turn 2 after the restart and finished P7 but managed to still score enough points to get pole for Race 3 on combined Race 1 and 2 results.

An extensive Safety Car after Lap 1 reduced the final SuperUtes racing time, but on the restart, Barbour was fighting for the win but damaged sustained from another Ute under Safety Car hampered his chances and he finished P3.

Dontas was fighting for a podium as well but fell to P7 with a blown turbo hose.

“Our weekend overall was pretty positive to get a pole, Mitsubishi’s first win and 3rd overall, can’t ask for much more. Race 2 & 3 were frustrating as we lost our chance at a round win but overall we are moving forwards in the right direction.” – Craig Dontas

“The weekend for the #87 was good, a couple of podiums across the weekend and we set the pace on Friday. We kept it clean but got tangled up under Safety Car in Race 3 which is never ideal. A solid weekend for Team Triton with the first pole, first win, a front row lockout and a podium in every race.” – Elliot Barbour

Round 4 of the SuperUte Series is being held at the Ipswich SuperSprint from July 20-22, with all races to be televised LIVE on Fox Sports.