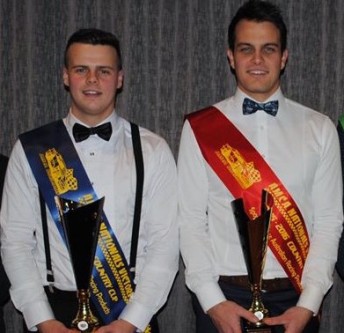 MEDIA RELEASE: Mills Brothers Racing had much to celebrate at the Victorian AMCA Nationals presentation night on Saturday, coming away with no less than 14 awards between the team’s drivers, Mathew and Jamie Mills.

The younger of the two brothers, Jamie, was crowned champion of the Barry Reidy Memorial, a highly prestigious series for AMCA Nationals.

“To take out the Barry Reidy Memorial and get my name on the perpetual trophy is a huge honour and means a lot to me,” expressed the 26-year-old after receiving the trophy.

“This series is one that everyone looks forward to on the calendar every year and is held in very high regard.”

Jamie also emerged victorious in the Country Cup, a seven-round series in which he was the only driver to win multiple feature races. Mathew Mills finished second in the standings for both the Barry Reidy Memorial and the Country Cup, completing a perfect team one-two result for Mills Brothers Racing in both series.

“I’m ecstatic to be named the Best & Fairest driver for this season,” conveyed the 33-year-old.

“It’s something I’ll definitely look back on with pride for years to come.”

Mathew finished on 24 votes, four clear of his younger brother, who was in second place on 20 votes, in what was a third one-two finish for MBR.

Having not competed in the Australian Title or any interstate titles, the Mills brothers managed to claim more silverware in the Burson Auto Parts Action Series and Victorian Overall point score. These series’ accumulate points from the titles, as well as the series rounds, which count towards the final standings. Jamie and Mathew finished second and third respectively in both points standings, behind Jamie Collins.

“We have to say a huge thank you to Phil Munday from OPS Gateway and Repair Management Australia for his ongoing support,” commented Jamie Mills.

“He’s been on board with us since the beginning and we are very appreciative of that.”

“We’re very pleased to announce that Strike Pro, a leading international fishing equipment brand, will be coming on board as a sponsor next season, which is very exciting for us,” announced Mathew Mills.

“We’re looking extremely forward to contesting more titles next season and we also have some upgrades in the works for both cars, which we’re hoping will enable us to become even more competitive.”

Mills Brothers Racing will contest their first race of the 2016-17 season at Rushworth Speedway on October 22, for the opening round of the Country Cup, before they head to Moama’s Heartland Raceway the following week, for the first round of the Action Series.

Mills Brothers Racing would like to thank their Crew Chief, Wayne Mills, for all of his efforts throughout the season, as well as Iain Welsh, Brad Watt, Bill Stoyel, Ally Stoyel, Kristy Thompson and Rodney Harty.