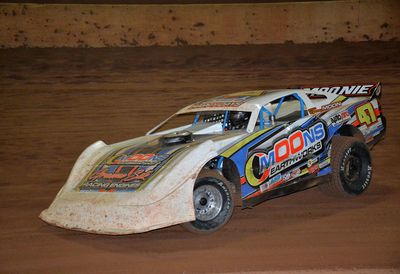 The biggest annual Super Sedan event in Queensland will be decided this Saturday night (May 15) when drivers from near and far converge on Archerfield Speedway to contest the GP53 Memorial, which doubles as round 12 of the McCosker Championship Series. With more laps, more money, more cars and more stars than any other event in the state, the GP53 will serve up some sublime sedan action from the very best in the business. In fact, four national championship winners, including four-time and current titleholder Darren Kane, will be amongst the 30+ entries, along with myriad current and former state titleholders. Also featuring on another variety-packed Archerfield program that has attracted more than 140 competitor nominations, will be round nine of the Shock Absorber Therapy AMCA Nationals Track Championship, plus Wingless Sprints, Compact Speedcars, Modlites, Open Sedans and Ford vs Holden vs Sigma sedans.

Established in honour of popular Super Sedan identity Graham Pascoe, the GP53 has immediately established itself as the most sought after race of each season, with drivers travelling from as far afield as Tasmania and Victoria to take part. Fittingly, the inaugural GP53 was won by Graham’s son Matt Pascoe, a three-time national champ who brings winning form into this year’s race, having scored an emphatic victory in the previous Super Sedan fixture at Archerfield last month. Kane is particularly strong at Archerfield and obviously looms as a huge threat in denying Pascoe back-to-back wins, but it is current McCosker Series leader Sean Black who has the most remarkable record of success so far this season, having finished inside the top five in all eleven completed rounds, including four wins. In fact, such is the strength of the category in Queensland at the moment, there are numerous potential winners from within the local ranks, including another former national champ in Steve Jordan, who has recorded four consecutive runner-up results in feature race competition and will be itching to secure an elusive victory.

Sam Roza is another standout from the season so far, currently sitting second in the series standings following a string of podium results, including his first ever feature race victory. In what is the longest race of the season at 53 laps, the vast experience of Wayne Randall should ensure that the category stalwart is very much in the thick of the action and poised to pounce when the opportunity arises. With $5000 on offer to the winner and $100 to be paid to the leader of each lap, plus an additional bonus of $1000 for the leader on lap 26 (a potential payout of over $11 000 for leading every lap), it is impossible to imagine that anybody will be content to play follow the leader at any stage of the race, setting the scene for some spectacular action as drivers chase every advantage in a bid to secure a share of the cash.

Those journeying from interstate include current Tasmanian champion and two-time national titleholder Callum Harper, along with fellow islander Steve Latham and a trio of Victorians in Ash Bergmeier, Jamie Collins and Michael Nicola Jnr, who is the current Victorian champion. Bergmeier finished fourth in the inaugural GP53 while Collins, who is fresh from his win in the Long Track Classic at Leeton a couple of weeks ago, will be taking on the much tighter confines of the Archerfield layout for the first time. Meanwhile, New South Wales will have five representatives in the field, with the Lismore-based Tania Smith and Hayden Brims being joined by Dion Bennett, Tyson Moon and a returning Lachlan Onley, a three-time national championship runner-up.

In AMCA Nationals action, Steve Potts is very much the man to beat as he chases back-to-back feature race wins and his fourth for the season. Only Bruce Marshall has been able to provide any persistent resistance to Potts this season with two feature race wins and a memorable charge from rear of field to finish second on another occasion, although he was out of luck at the last round when a flat tyre curtailed his challenge. Whilst he prevailed in the Victorian Championship this season, the tougher competition at home has seen Matt Hardy struggle to replicate that level of success, with his most recent win coming in somewhat fortuitous circumstances. Meanwhile, having shed his run of bad luck to finish on the podium at the previous round, Steve Price will be looking to take the next step with an overdue visit to victory lane.

Not surprisingly given that it is the final chance to fine-tune preparations for their annual 50-lap enduro next month, Wingless Sprint teams will be out in force this weekend and might just upstage the headline act when it comes to competitor numbers, with more than 30 drivers nominated. Whilst Lachlan Robertson, Brody Thomson and Dubbo’s Mark Blyton are all feature race winners at Archerfield this season, this weekend will be the first time that all three have competed on the same night as they look to become the first driver to secure multiple successes. Blyton will be one of a dozen NSW-based competitors in the field. Others venturing north of the border include David Eggins, Kevin Willis, Jamie Usher, Michael Butcher and Sydney’s Jason Bates, who recently took out the Queensland Championship in Toowoomba.

Although round three of the Dondex/Redcliffe Wrecking Modlite Extreme Series has attracted a solid field in excess of 20 cars, a couple of notable absences from the entry list leaves Terry Leerentveld as a very firm favourite to continue his remarkable run of success. Dan Lewis and Sean Rose seem the most likely candidates to spring an upset, although the level of competitiveness has certainly lifted this season and there are several drivers who are edging closer to a breakthrough success.

Teenagers Bodie Smith and Harry Stewart are expected continue their battle for supremacy in the Compact Speedcar ranks while, somewhat ironically perhaps, the Super Sedan-mounted Brad Trussell and Keith Craft will take on the Late Model of Robin Bains and a variety of other tin top incarnations in the Open Sedan ranks.

Gates open at 1.00pm for competitors and online ticket holders only, with general admission ticket sales and entry from 3.00pm. Early racing, which includes the guys and gals of Ford vs Holden vs Sigma sedans, will hit the track from 5.00pm and the main program will get underway from 6.00pm. There is no reserved seating for this event, however all patrons must maintain 1.5m social distancing.