Stellar field for battle of Brisbane

Stellar field for battle of Brisbane 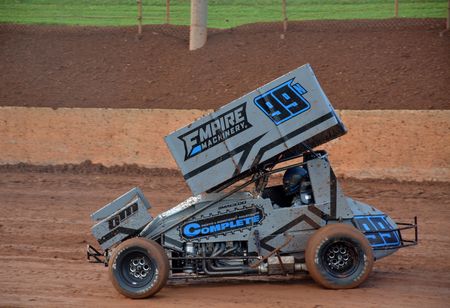 After the disappointment of having round one of the Speedway Australia States Series washed out on Wednesday night, Sprintcar teams will reconvene at Archerfield Speedway this Friday and Saturday nights (January 7 & 8) to contest round two of the championship that also doubles as the Titan Garages Brisbane Open, which is Queensland’s richest and most prestigious Sprintcar event. Despite the current challenges that come with travelling within Australia and overseas, a stellar field has been assembled for the weekend, with American WoO star Carson Macedo and current national champ Jamie Veal headlining the entry list. Macedo comes to Australia on the back of a third-place finish in the World of Outlaws Championship, while Veal has been based in Brisbane for the last week or so and, with three podium finishes from as many starts, he certainly brings some strong form into the contest.

Support racing across the weekend also promises to deliver some top flight entertainment, with Friday night also featuring a strong field of Midgets contesting round five of their TFH Series, along with Lightning Sprints and Modlites, while a massive Saturday night program will also include AMCA Nationals, Wingless Sprints and Formula 500s.

Given the dearth of international speedway competition in Australia for the last couple of seasons, Macedo is a very welcome addition to the field and the Californian will face-off against more the 40 drivers from five states. In fact, it would not be an exaggeration to declare that, with the exception of Western Australia, the very best driver/s from every state are amongst the entries. Joining Veal in leading the Victorian representation will be Peter Doukas and former national champion James McFadden, who finished seventh overall in the WoO championship this season and has accumulated several feature wins since returning to Australia, albeit in lesser company than he will face this weekend. The South Australian challenge consists of Brock Hallett, Matt Egel and Brendan Quinn, while New South Wales has an expanded squad led by Ian Madsen and newly crowned Victorian champion Matthew Dumesny that also includes Marcus Dumesny, Michael Saller, Jackson Delamont and Mick Sauer. Meanwhile, the sole Tasmanian representative in Jock Goodyer might just be the interstater most likely to emerge as the Open champion given he is one of only three people to have won a Sprintcar feature race at Archerfield this season. In fact, from five appearances, Goodyer has finished on the podium on four occasions.

However, the biggest obstacle that stands in the way of any visitors prevailing in Saturday night’s 50-lap feature race might just be popular local ace Luke Oldfield. With four feature race wins so far this season, including two in the last week, the Gold Coast-based Oldfield is in peak form, currently sits atop the Archerfield Track Championship standings and will be relishing the opportunity to upstage the international and interstate challengers. Whilst the likes of Aaron Kelly, Brent Kratzmann, Kevin Titman, Allan Woods, Ryan McNamara and Darren Jensen are also expected to flourish amidst the additional competition coming their way, there is a bunch of young guns who will relish the opportunity to shine on the national stage, so it will not be a surprise if the likes of Ryan Newton, Jy Corbet, Randy Morgan, Karl Hoffmans or Tyler Prosser make a significant mark on proceedings.

On Friday night, Midget competitors will contest round five of the TFH Series and, even with round two winner Jayden Peacock missing from the line-up, they will dish up their strongest field so far this season, assuming all nominated drivers are in attendance. The battles up front between Charlie Brown, Michael Kendall, Rusty Whittaker, Scott Farmer, Brock Dean and Casey O’Connell has been sensational and with others, such as Lachlan Paulger, Brendan Palmer and Dylan Menz, having also found themselves in the thick of the action at various times, it really has been a great start to their season. The fact that long-time category frontrunner Darren Vine is not amongst the eight different drivers who have featured on the podium so far this season is testimony to the level of competition we have witnessed but, should Vine return to his best form on Friday night, the fight at the front of the field is going to be even more intense.

Following a dominant win just a few nights ago, it is hard to look past Kurt Wilson ato again be the frontrunner in the Lightning Sprints, with Tyler Stralow and Andy Kimm the most likely candidates to prevent a repeat rout, while the Modlite feature seems likely to emerge as a fight between current national champ Sam Gollschewsky, who was brilliant at their last outing, and former titleholders in Terry Leerentveld and Klinton Hancey. Beyond the big three, Dan Lewis and Chris Fing are certainly capable of racing their way onto the podium.

The Saturday night supports have well and truly answered the call en masse, with more than 65 competitor nominations across the AMCA National, Wingless Sprint and Formula 500 categories.

Round six of the Shock Absorber Therapy AMCA Nationals Track Championship is shaping as another three-way tussle between Bruce Marshall, Steve Potts and Steve Price, the trio who have all won all five rounds between them. With Potts missing the previous round, it was Price who prevailed over Marshall, which at least left one spot on the podium for somebody else. On that occasion it was Matt Hardy who finished third, but he will need to find some extra pace if he hopes to stop the three musketeers from enjoying another unfettered frolic at the front of the field. The return of Lee McKinnell certainly offers some potential for change at the front, while the likes of Lewis Gamble, Brett Robotham, Michael Denning or Graeme Holland will be poised to pounce should an opportunity arise.

If their last outing on January 2 is any indication, local Wingless Sprint drivers are in for a frustrating night with the Blyton boys rolling back into town. The Dubbo-based father-son team of Mark and Marshall Blyton completely dominated round six of the Boss Hoggs Steakhouse Track Championship, winning all four heats before finishing first and second respectively in the feature race. Following his two feature wins earlier in the season, Robert Mazzer was expected to lead the local charge on that occasion but inexplicably found himself drawn at the back of the field in both heats, which left him too far back on the feature race grid to mount any sort of challenge. If Mazzer can qualify somewhere closer to the front of the field this Saturday, he might be able to prevent another Blyton blitz, otherwise somebody else will need to step up and slay the southern invaders.

Round five of the Mainstreme Automotive Formula 500 Series is shaping as potentially the most competitive of the season with Queensland champ James Kennedy heading an entry list that includes several potential prevailers come feature race time. Liam Williams, Kaydon Iverson and Kristin Williams loom as Kennedy’s biggest threats, although if Kurt Wilson wins the Lightning Sprint feature race on Friday, he might just be the one to watch as he chases a unique feat of scoring feature wins in two different categories on consecutive nights. Brady Argles and Brock Thornton have also proven themselves as race winners and there are a bunch of Junior graduates who are really starting to make their presence felt and it certainly won’t be a surprise to see the likes of Kacy Lee Black, Noah Ball, Jarred Boys or Amanda Chaffey mixing it with the old folks.