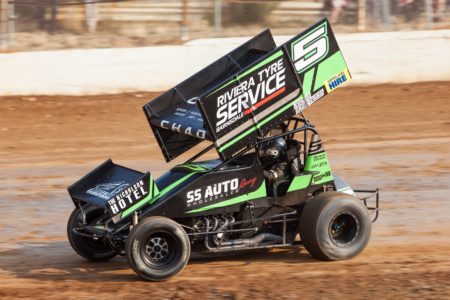 After starting this season’s campaign with four feature-race wins from the opening five VSA Sprintcar Club Championship rounds, Steenholdt rocketed to the top of the point standings lead and that is where he remained through to the season coming to a premature end due to the coronavirus outbreak.

“It’s certainly not the way I wanted the season to end, but to clinch the VSA Sprintcar Club Championship for the third season in a row is a big honour,” expressed the Paynesville, Victoria-based racer.

“Heading into this season, I wasn’t too sure how much racing I was going to do, so when I started the season strongly, it gave me the drive to keep racing and that allowed me to win another VSA Sprintcar Club Championship.”

The only lowlight of Steenholdt’s season was during the running of the Victorian Title at Bairnsdale Speedway in February.

“I’ve been racing in VSA Sprintcars for six seasons now and the one event that continues to elude me is the Victorian Title,” the pilot of the Vic # 5 SS Auto Wholesaler / Riviera Tyre Service supported Maxim explained.

“At this season’s event, I had qualified on pole position for the feature race, but I didn’t have things go my way during the feature race, as my team and I messed up the car’s setup and I was disappointed to not be able to finish.”

Looking ahead to next season, Steenholdt is planning to step from racing within the VSA Sprintcar class on a full-time basis and hopefully do some 360 and 410 Sprintcar racing.

“I dipped my toe into 360 Sprintcar racing last season by contesting the Gold Cup event at Western Speedway in Hamilton and ended up finishing just off the podium in fourth, so that was really encouraging,” Steenholdt said.

“I’ve had a lot of run racing six straight seasons in the VSA Sprintcars but I feel that now is the right time to step away from the class on a full-time basis and chase one of my goals to go 360 Sprintcar racing and maybe even try running a few 410 Sprintcar shows.”

Special thanks must go out to the SS Auto Wholesaler team’s crew chief Marc Behan, pit crew member Glen ‘Turbo’ Ashlin, Steenholdt’s wife Sheena and son Cade and daughter Zara, and everyone else who comes to the track to support the team.