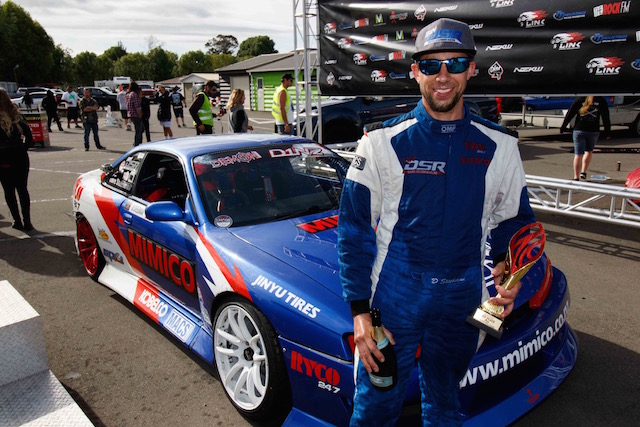 The win is Steedman’s first in the D1NZ championship, and two wins in a row for the RB-powered Nissans.

“We’ve worked on the cars constantly since round one,” said Steedman, following his win.

“My car needed a lot of upgrades, and we’ve been pushing all the way through – No holiday for us. The crew have been working tirelessly. It’s so awesome to get this type of result from all the hard work we’ve put in.”

“It has been a real hustle for us to pull everything together. But we had two cars working well this weekend, and it’s awesome I can reward the crew and the team for all the hard work and effort.”

The battles brought mixed results, and despite taking the top spot in qualifying, Daynom Templeman couldn’t make it past the top-16. The first of the top-16 battles pegged him against Australian Matty Hill. On the lead run, Templeman pulled a gap on Hill, but lost his proximity advantage as he dropped a wheel down on the inside clip at the final corner.

A tight chase by Templeman forced the fight to a one-more-time. But again, the pair couldn’t be split and another one-more-time was called. Having started the top-16 as the first battle, through the one-more-times, and sudden death, they ended up finishing the top-16 prologue.

Benjamin Wilkinson threw away a strong lead run in his chase in the top-16, as he ran too deep into the switch at the first turn. Wilkinson made contact with the lead car of Dave Steedman, resulting in Wilkinson spearing off the road.

Top-five qualifier Cole Armstrong had his Nissan Skyline 250GT dialed in on his first run, as he took a healthy advantage over Jaron Olivecrona. On his chase, Armstrong hassled the back of the leading Silvia, earning him the win, and a pass into the top-eight.

‘Fanga’ Dan cruised through to the top-eight by virtue of a one-more-time with cousin Dylan Woolhouse. But in his top-eight battle with Darren Kelly, the Century Batteries backed drifter got lost in the smoke and fell off the track.

An uncharacteristic failure by Nico Reid gave Tom Marshall a 10-0 advantage. It later turned out Reid was suffering through clutch issues. The following run, Reid hit the rear of Marshall’s Silvia, which sent Reid off at high speed over the grass. Meanwhile, brother Tom Marshall defeated Jodie Verhulst after she dropped two wheels off during her chase run.

The brothers came up against each other in the top-eight battles, and went to a one-more-time after the pair made mistakes in each of their runs. Tom Marshall took the win, after Joe failed to initiate a drift.

A tough battled against Darren Kelly saw the Evergreen Tyres drifter struggle to keep up with the RB30 power plant of Kelly’s Nissan Skyline GT-R.However, Marshall received a reprieve when Kelly straight lined.

After a lengthy delay to fix Cole Armstrong’s wounded clutch, the V Energy backed drifter struggled hard as he led Dave Steedman. Armstrong drove off the track on the second switch, handing Steedman the win, and through to the final against Tom Marshall.

In the fight for third place on the podium, Armstrong faced Kelly in the battle of the heavyweights. An epic battle saw Armstrong hustle his 250GT on the back of Kelly’s GT-R. It looked like Armstrong would take the advantage, but a straight line exiting the hairpin handed Kelly third.

Steedman led Marshall on the first run. The margins between the pair ebbed and flowed as Marshall held tight on the back of Steedman through turn one, dropped back through sector two, and hustled to gain back car lengths in the final sector.

On his lead run, Steed hit the clipping points and ran a clean line, which ultimately proved to be the decider, as he took his first victory in the series.

“I was stoked with that final battle against Tom Marshall where it was off the hook, and it could’ve gone either way. It must’ve been really close, and I’m rapt to take the win.

“With the car feeling so solid today, anything’s possible. It’s really down to me to keep getting these podiums. It wasn’t the greatest start at round one, but we’re up here now and let’s keep the momentum going.”

The third round of the Demon Energy D1NZ National Drifting Championship heads to ASB Baypark Stadium, Tauranga. For more information about the round three, visit D1NZ.com. 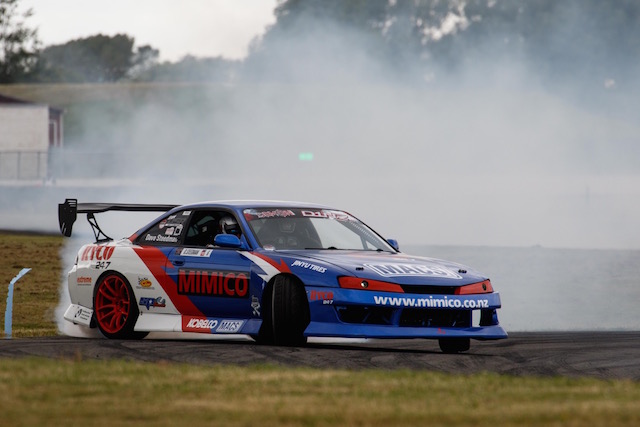