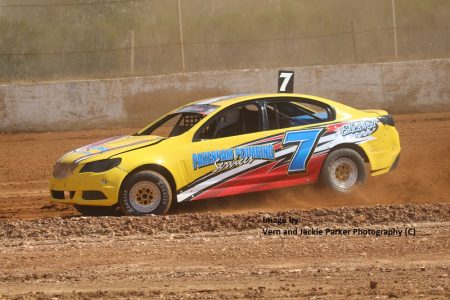 Supporting features also include the Miles Cup for Standard Saloon supported by Miles Mechanical to give drivers a chance to test at the venue before their Victorian title in March keeping everybody busy as will the Modified Sedan state series back at Nyora supported by Ramsdale Wreckers with many of the top driver’s local Nyora racers.

The pinnacle of every racers class no matter the value of their cars is to win a state title or national title if the class has one. This weekend two Victorian champions will be crowned at Nyora Raceway with the Unlimited Sedan title being defended by Nyora member Warrick Taylor who won last season at Rosedale.

Taylor will be in competition with the likes of Sean Lister the current Victoria number two driver who is fresh off a win last weekend in Ballarat, the current king of the 100 Lap Derby Lennie Bonnici, Scott Ellis who has returned to racing after a season off, Darren Nelson the third best driver at the last state title and a host of other strong competitors.

A mix of V8 and 6 cylinder powered cars all running purpose built chassis at a light weight and great power to weight ratios is what makes up the Unlimited Sedans. Some of the smaller engine cars could come into play as the night wears on and the track gets some wear into it as you have to be able to get the power to the ground without spinning wheels.

With last year’s Junior Standard Saloon Victorian champion now in adult racing a new champion will be crowned regardless of the result this year with a number of kids in particular in great form behind the wheel. Jack Yeomans, Lewis Williams, Courtney Meakins, Kacey Ingram, Damon Ingram, Harry Cecil and Rhys Lansdown in particular are drivers to keep your eyes on this Saturday night.

Lansdown and his girlfriend Courtney love to swap paint on track and neither of them give each other an inch; however they will need to be wary because others will make them pay if they get in a scrap with each other. Lansdown will be in a brand new car built for him kindly by the current adult Open Standard Saloon champion Nick Chrystie. Of course the sub story to that is that Chrystie did totally destroy Lansdown’s last car and had to build a new one. Lansdown has refused to hand over a set of keys to the car to Chrystie to compete this weekend in the Miles Cup though.

This race is too hard to pick, the bragging rights leading into the Victorian title is so very important and getting this win to honour the Miles family is also high on the priority of many that have known the family for years.

Finally for no other reason than the fact it is a big night of racing is the Modified Sedans, a class that is the fan favourite for many in the crowd.

Andrew Blackwell is one of many Nyora cars that fans are keen to see win the event in the Modified Sedans with local sponsor Russell Hill having two cars in the event one for his son Nick Hill and the other for friend Brad Warren and he hopes to have one of those cars at the front end of the field to give the announcer something to speak about.

Some of the best young drivers going around such as Nick Cockerill, Brody Chrystie, Daniel Simpson, Brock Atkins, Kye Walters and Matt Nelson are also in the field and amongst the favourite for victory.