State title on the line

State title on the line 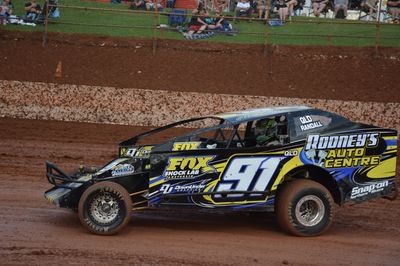 After a few hectic and weeks of Sprintcar action at Archerfield Speedway, this weekend will see Dirt Modifieds in the spotlight as they contest the 2020/2021 Queensland Championship on Saturday night (January 23). Over 20 competitors from Queensland and interstate have nominated for the event, with five national championship winners amongst the entries for an event that doubles as the opening round of the annual 5 Star Series that is contested across the country. Also on the program will be Compact Speedcars, Microsprints, Open Sedans and Stockcars, with Legend Cars also featuring in what will be their Archerfield competition debut.

Attempting to compile a form guide for the Queensland Dirt Modified Championship looks easy in theory given that Kevin Britten, Mark Robinson, Andrew Pezzutti, David Clark and Scott Cannon have all tasted success in the Australian Dirt Modified Championship, thereby cementing their place amongst the favourites. With five consecutive national championship wins to his name, Britten is obviously the category benchmark and the high-side heroics for which he is synonymous have endured him to race fans at home and interstate, however with the level of competition in the category, as witnessed in the PB44 event at Archerfield earlier this month, Britten will need to be at his barnstorming best if he intends to add another state crown to his already exhaustive list of accomplishments.

Robinson, who has accumulated more national championship podium finishes than any other driver, scored a feature win earlier in the season in Toowoomba and is always a contender at Archerfield, while Clark has won both Dirt Modified feature races contested at Archerfield so far this season. As the most experienced driver in the field with more than 25 years in the category, Pezzutti continues to be a regular feature race winner at Archerfield and elsewhere, while Cannon also remains a force some 20 years after his national title triumph. However, beyond this group, the likes of Mitchell Randall and Geoff Phillips must certainly be considered title contenders. Randall has scored a couple of feature wins already this season south of the border, while Phillips has finished third in the New South Wales title previously and is very much in the mix to improve upon that result in his home state championship. Others likely to feature prominently in the title fight include Chris Corbet, Darren Tindal, Trent Schofield and Zac McDonald, while Luke Dunn was impressive in his Archerfield debut at the PB44 just a couple of weeks ago.

Whilst the Compact Speedcars have been a little lacking in numbers so far this season, they have certainly seen an increase in the level of competiveness from those drivers that have hit the track, with three different feature winners from five shows and several other strong performers. Bodie Smith and Michael Kendall have two wins apiece, with Chris Pidgeon winning the most recent event, however there have been another six drivers who have finished on the podium in one or more feature races, with Harry Stewart having done so on three occasions. In fact, Stewart is the only driver who has finished inside the top five at every event and will no doubt be hankering to clinch a feature win in what has already been a very impressive rookie season.

If the nomination list translates accurately into the number of cars in attendance, Microsprints will present their biggest field of the year, with Australian champ Shane Munro heading the entries fresh from a win in Gatton last weekend. Jason Glynn, Eddie Schwehla and Ben Le Pla, who won the previous feature race at Archerfield, loom as the biggest threat to Munro, although a third-place finish in Gatton suggests that Jacob Lynd should also be a contender.

Whilst the current state of the nation resulted in the necessary cancellation of the Australian Championship for Legend Cars scheduled for this weekend, local fans will still get to see current national champ Rob Rawlings in action as part of a small field making their first ever racing appearance in Brisbane.

Open Sedans and Stockcars will complete the program, which gets underway with early racing from 5.00pm, while the main program will kick off at from 6.00pm. Pit gates and the main gates for online ticket holders open at 2.00pm. The general admission ticket box will open at 3.30pm. Please be aware that, whilst there is no reserved seating for this event, all patrons must maintain 1.5m social distancing between groups, whether seated on the grass hill or in the grandstand/bleachers.