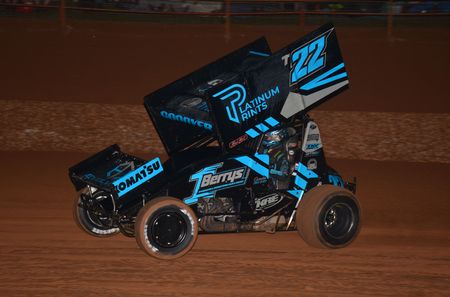 There is no doubt that the 2021/2022 Queensland speedway season has been one of the most challenging of recent times but, despite the myriad setbacks that have conspired to disrupt competition, Archerfield Speedway has continued to serve up spectacular action from many of Australia’s very best competitors. With inclement weather having forced the cancellation of the previous scheduled show, the season is set to conclude with two huge events on consecutive weekends. This Saturday night (May 28), more than 30 teams from Queensland and interstate will contest the Queensland Sprintcar Championship, while the following weekend (June 4) will feature the East Coast Logistics Sprintcar Track Championship Grand Final.

Also on the program this Saturday night is the annual 50-lap Midget enduro which, as it always does, has lured drivers from interstate and overseas to take on a big field of locals looking to defend their home territory and, with AMCA Nationals and Modlites also out in force, more than 100 competitors will hit the track for another massive night of motorsport entertainment.

If the results from the Australian Sprintcar Championship held at Archerfield last month are any indication, it is Tasmania’s Jock Goodyer who carries the weight of favouritism into the Queensland Championship battle. Of course, Goodyer finished third in that memorable national title final, the culmination of an extended campaign at Archerfield throughout the season that has thus far netted him a feature race win and four podium results in ECL Championship rounds. With South Australia’s Brock Hallett and Sydneysider Michael Saller also amongst the nominations, should any of this trio emerge victorious, they will join some very illustrious company in Gary Rush, Brooke Tatnell, Robbie Farr, Garry Brazier and James McFadden as the only interstate-based competitors to have won the event.

Having dominated the opening night of the Australian Championship, only to be denied his moment of glory in the championship final by a flat tyre, rest assured that Luke OIdfield has no intention of also allowing the state championship trophy to head interstate. With five feature race wins and ten podium results from 13 rounds of the ECL Track Championship so far this season, Oldfield has enjoyed a remarkable season of success that places him firmly amongst the very best Sprintcar competitors in the country and he also happens to be the only driver in the field to have won this event previously, all of which points towards him being the benchmark that Goodyer and the other 30 competitors will need to better if they hope to land in victory lane.

Currently sitting second overall in the ECL championship standings, Aaron Kelly has a chance to create his own piece of history should he emerge victorious in the 35-lap championship feature race on Saturday night. In addition to scoring his first feature win for the season, Kelly would become the first third-generation winner of the event, joining grandfather Bob and father John on the Queensland Championship honour roll.

As the only other driver in the field with a feature win at Archerfield this season, young gun Ryan Newton will be desperate to render the heartbreak of his Australian Championship campaign a distant memory by bouncing back in the best possible way, with Jy Corbet, Kevin Titman and Taylor Prosser the only other starters to have featured on the podium at Archerfield this season. However, should the likes Bryan Mann, Adam Butler, Brent Kratzmann, Darren Jensen or Randy Morgan finally rediscover the form that made them consistent frontrunners in previous seasons, they will certainly find themselves in the thick of any fight for places on the podium.

Winning a 50-lap Midget feature race is a significant challenge at the best of times, but when Sydney veteran Nathan Smee is amongst the starters, the task becomes a significantly more daunting proposition given his mastery of the long-distance format. Whether leading from the front or chasing from further back, the former national champ and current Queensland titleholder invariably finds himself in the premier position at the fall of the flag. In addition to a stout field of locals, Smee will face off against several other interstaters, including Victoria’s Harley Bishop and a quintet of fellow NSW-based drivers comprising recently crowned state champion Michael Stewart, along with Matt Jackson, Matt Geering, Mitch Brien and Daniel Paterson. However, it is the inclusion of current New Zealand champion Hayden Williams and hard charging countryman Kaleb Currie in the field that adds an extra level of excitement to proceedings. Williams returns to Brisbane on the back of a strong campaign at home that included a win in his final race of the season and, having also enjoyed recent success in America, this weekend might just see him become a feature race winner in three different countries, all within 12 months.

Ironically, it is an expat New Zealander who leads the locals into battle, with five-time national champ Michael Kendall having dominated the TFH Midget Series this season with eight podium results from 12 starts at Archerfield, including three feature race wins. Driving for the Ipswich-based Ian Boettcher Race Parts team, Kendall has been such a standout that Rusty Whittaker and Scott Farmer are the only others in the field who have visited victory lane this season. Usually such a dominant presence in the category, Darren Vine has endured a wretched season but is certainly capable, and deserving, of a strong result to show that he remains a force, while the likes of Dylan Menz, Casey O’Connell Brendan Palmer and Troy Ware could also feature prominently.

Having won every round between them, the Shock Absorber Therapy AMCA Nationals Track Championship has been a three-way fight from the outset between Bruce Marshall, Steve Potts and Australian champ Steve Price and, given that they have also collectively won 17 of the 32 heat races contested, there is no reason to think that the series finale will be any different. Price and Potts have three round wins apiece, with Marshall having emerged victorious on two occasions. In fact, such has been their dominance, Scott Hitchcock, Thomas Vickery and Kev Stow are the only others in the 20-car field who have featured on the podium. Even the likes of Tony Blanch, who clinched his second Queensland Championship victory in Bundaberg last month, has failed to make much impression and, along with the rest of the field, he must launch an all-or-nothing assault if he intends to prevent the trio from a sweep of the series.

Modlites have also secured a strong field for the final outing of the season and whilst Terry Leerentveld looks hard to beat in his bid for consecutive feature race wins, the likes of Sean Rose, Gavin Thomas, Kyle Honour, Tyson Snow, Dan Lewis and Chris Fing should certainly be in the mix for the minors and poised to pounce should the opportunity arise.

Gates open at 2.30pm for online ticketholders, with general admission ticket sales from 3.30pm. Early racing commences at 4.15pm and the main program, which will also feature a spectacular Fireworks display, gets underway from 5.00pm.