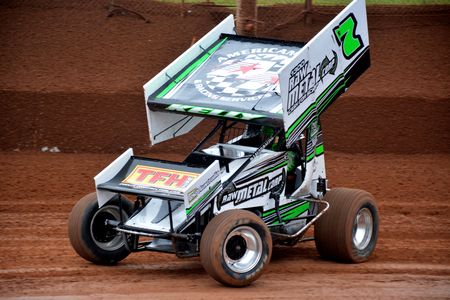 Speedway fans, believe the hype! It really is happening this weekend. The Grand Final of the Speedway Australia QLD/NSW States Sprintcar Series is coming to Archerfield Speedway in Brisbane this Saturday night (January 15). Originally slated as the opening fixture at the brand new Eastern Creek Speedway in Sydney, unfavourable weather conditions and staffing shortages as a result of increases in COVID infection numbers in New South Wales has resulted in construction delays at the state-of-the-art facility. As a result, the series finale will now be held in Brisbane this weekend, which is a fantastic development for the local fans who have already lost two nights of racing in the last week to inclement weather.

As disappointing as it is for NSW competitors and fans for the opening of Eastern Creek to be delayed, it does however provide another opportunity for the local competitors to upstage the interstate and international teams who rolled into town expecting an easy passage to the podium, only to find themselves floundering against the hometown heroes. The one visitor who was able to match the pace of the locals in the Brisbane Open was Australian champ Jamie Veal, only for him to suffer an engine ailment in Toowoomba on Sunday that will force him to miss this weekend. While WoO star Carson Macedo bounced back from his early exit in the Brisbane Open to finish third in Toowoomba, which he followed up with a fourth-place finish in Lismore on Wednesday night, it is hard to imagine that he or team owner Sean Dyson would be satisfied with anything less than a feature race win to end their States Series campaign. An added bonus for race fans this weekend is the fact that Macedo, who also happens to be the reigning Australian Midget champion, will be doing double duty on Saturday night.

As the previous rounds have demonstrated, the biggest obstacle Macedo faces in forging a path to victory lane in Saturday night’s feature race is not the so-called stars from interstate, but rather a couple of local lads who have proven almost unbeatable since the start of the season. Luke Oldfield and Lachlan McHugh have been more than a match for anybody who has dared to take them on and that certainly has proven to be the case in the previous rounds of the States Series, with Oldfield in control of the opening round until a lapped car intervened, before bouncing back brilliantly to win the following night in Toowoomba. McHugh, meanwhile, endured a tough start to the series when a breakage sent him hard into the wall during time trial qualifying at the Brisbane Open and rendered him a spectator. Whilst it was probably of little solace to learn that his only lap of the night was still good enough to have him sitting fifth overall on the timesheets, McHugh certainly expunged any lingering disappointment when he emerged as top qualifier in time trials in Toowoomba before finishing second behind Oldfield in the feature, while at Lismore on Wednesday, both were on the podium again. McHugh finished second and with a third-place finish, Oldfield now finds himself in the prime position to emerge as overall States Series champion with a 90-point lead over Tasmania’s Jock Goodyer in the standings, with Macedo sitting third at the moment.

Needless to say, Goodyer is once again amongst the entries, having been a standout performer in previous outings in Queensland this season as one of only two drivers, other than Oldfield and McHugh, to have won a Sprintcar feature race at Archerfield this season. He also finished on the podium at the Brisbane Open last Saturday night and will be primed to add a States Series feature win to his growing list of achievements. South Australia’s Brock Hallett is also in the field again and looking to improve on his best result of seventh in the States Series rounds thus far while Robbie Farr, having made an appearance earlier in the season that resulted in a runner-up finish behind McHugh, also returns this weekend.

Aaron Kelly and Adam Butler both delivered very strong performances in the Brisbane Open, with Butler running as high as second before fading to finish down the order while, at one stage, Kelly looked very much within reach of a podium result but ultimately secured a fine fifth, while Kristy Bonsey also delivered her best performance of the season last weekend and no doubt all three are hoping to carry that form into the battle this Saturday night.

It is not surprising that, despite the short notice, the Midgets have secured their strongest field for the season thus far. After all, this is the last opportunity for track time prior to the Queensland Championship next weekend, which is immediately followed by the Australian Championship on January 28/29. Therefore, anybody serious about making their mark in those two events is wisely taking this opportunity to fine-tune their championship preparations. When Macedo won the national title at Warrnambool in the 2019/2020 season he became the seventh American to do so and, with COVID disruptions having prevented the event from being staged since, he has maintained his mantle as Australia #1, no doubt to the great frustration of local competitors who will now finally have a chance to bring the trophy back to Australia.

Such has been the level of competition this season, each of the four TFH Series rounds has produced a different winner and, with Macedo and a few interstaters also in the mix, this promises to be the best yet as they take on some very tough opposition in the form of series frontrunners Charlie Brown, Rusty Whittaker, Scott Farmer, Michael Kendall and Casey O’Connell. Howver, it is perhaps veteran Darren Vine who might be most dangerous given he has endured a somewhat lacklustre start to the season and desperately needs to find some form if he hopes to contend in the weeks ahead. Add some border jumpers such as Matt Geering, DJ Raw, Jordan Mackay and Jack Bell into the mix, along with Formula 500 gun Liam Williams and the exciting highline heroics of Lachlan Paulger, who has been very fast on several occasions without reward, and the fuse has been lit for an explosive night of action.

Given that Wingless Sprints and Formula 500s both featured on the program last Saturday night and were not originally scheduled for competition this weekend, category organisers have done very well to muster solid fields for the support program, with interstaters amongst the entries for both. In Formula 500 it will be particularly interesting to see how two NSW-based youngsters in Blake Matthews and Jac Laynerie fare, having recently graduated from the Junior ranks. Laynerie stepped out of the Juniors for the first time during the recent Speedweek Series in Victoria and promptly scored a feature race win against many of the best drivers in the country, while Matthews is no stranger to Brisbane, having made several appearances here in Junior competition. Expect to see Lachlan Robertson and Jamie Usher amongst the front runners in the Wingless Sprints events, with David Eggins also one to watch despite it being his first Archerfield outing for the season.

Gates open at 3.00pm for online ticketholders and general admission ticket sales are from 4.00pm, with early racing at 5.00pm. The main program, featuring the Speedway Australia Sprintcar States Series Grand Final, will get underway at 6.00pm.