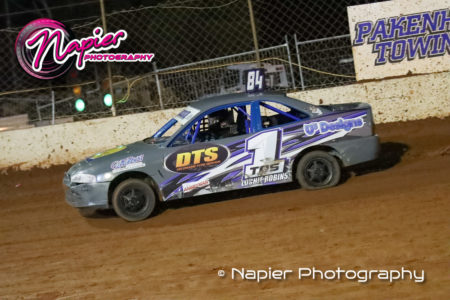 This Saturday evening from 3pm forty of Victoria’s best Junior Sedan racers with a handful of strong interstate entrants will compete for the number one plate to be recognised as the state champion of Victoria at Nyora Raceway with the Wingless Sprintcars returning to determine the Nyora Track Champion for their class also.

Drivers in the Victorian Junior Sedan have had their title postponed twice already this season and with a seven-day forecast suggesting a clear day ahead, this time the event should be run and won.

In light of this weekends Covid concerns in Victoria, Nyora Raceway are cleared to hold a race meeting with a Covid Plan in place. Everybody on race day is required to follow direction and adhere to Covid requirements which includes and is not limited to signing in on via the QR code and maintaining distance away from those you do not already associate daily with.

Interstate competition comes from Lachlan Robins the Tasmanian Junior Sedan champion who won the last Nyora Junior Sedan race meeting based on points, whilst he is joined by Kiarna McKercher also from Tasmania who drove well at the before mentioned event. Brother and Sister Jaiden and Sophie Santin from Lismore club in New South Wales and Jack Murphy from the Australian Capital Territory club also join the action.

A host of Victorian’s we all know about will be vying to be the one that keeps the title in the state and on a Victorian car and some of the competitors to watch, yet not limited to include Jaxson Vella, Carter Metcalfe down from Mildura, Dylan Barrow whose been winning most recently on a regular basis, Linken Paterson, Jayden Bryant and Rhys Meakins all from the Alexandra club in the Yarra Valley. Anything can happen on race night and perhaps a new break out star will come through from outside of these known front runners.

After a horrific crash at the last attempt to run the ‘Idigit & ML Automotive’ supported Nyora Track Championships, twenty-three cars have entered to come back and do it all over again. Whilst Ben Poliansky will not be on track this time recovering from a huge crash, drivers that are in the line-up include last meetings winner Travis Millar, Robert Whiteside, Daryl Logue, Wayne Logue, Brett Milburn, John Egan and Coby Elliott from New South Wales, Todd Hobson, Christopher Temby, and Peter Logue.

Millar is the man most consider to beat at Nyora however Temby is in a winning season, Hobson has been in a podium spot in various classes all season, and the Logues have more chances than any other to pull off a win with father and two sons in the field.

Supporting the main events will be another field of Junior Sedan racers, the mostly local Junior Standard Saloons with Victorian champion Damon Ingram leading the field that includes Harry Cecil, Owen Cecil, Linken Paterson and Blake Smith amongst them.

All the action on Saturday starts at 3pm whilst the gate will be open for public from around Midday for entry will cost $20 for an adult, Kids 12 to 16 are $10 each whilst all other children are free and Pensioners are $10, Family ticket of 2 adults and two kids 12 to 16 is $50.