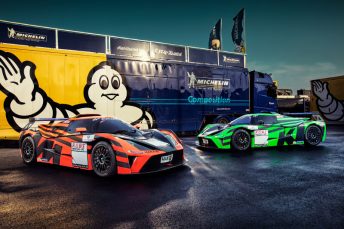 The intensive preparation phase is over. Time to go racing. The KTM X-BOW GT4 will be on the start in the VLN 4, and will have its own ‘Cup’ ranking, to be exact the “KTM X-BOW CUP powered by MICHELIN”. “Thanks to excellent cooperation between the DMSB, the VLN Organization, Reiter Engineering, Michelin and the KTM Sportcar GmbH our latest ‘motorsport baby’ is now up and running,” confirmed KTM board member Hubert Trunkenpolz, who is particularly pleased about the upcoming races at the legendary Nürburgring Nordschleife. “The Nürburgring with the Nordschleife is something very special for any racing driver, but naturally also for every vehicle manufacturer. It is a unique racing circuit and also an exceptional challenge. That we are present here with our own Cup competition is really great for us, and for the KTM X-BOW GT4!”

ISERT Motorsport team boss Uwe Isert is no less pleased. He is here as the ‘Pioneer Team’ with three vehicles nominated to contest the VLN 4. “We were immediately super enthusiastic when we heard about the plans to have a Cup competition for the KTM X-BOW GT4 as part of the VLN. For us, the car is an attractive combination of safety, performance and cost efficiency and I am sure that there will be many teams that will follow us into the competition. What I am especially proud of is that we will be able to start with two great driver pairings and we have already been able to rent a new vehicle to customers for the first race.

The ISERT Motorsport driver pairings mentioned are, on the one hand, the German brothers Johannes and Ferdinand Stuck, and on the other, a German-Swiss pair made up Arne Hoffmeister and Fredy Barth. All four drivers are no strangers to international motorsport, nor to the Nordschleife and they go into the competition with great anticipation, as Johannes Stuck confirms: “It’s fantastic that we can return to the Nordschleife for a full Cup season with ISERT Motorsport, and in the KTM X-BOW GT4. Ferdi and I are fully motivated, and we’re thrilled to be able to be there in such a spectacular and fast car.” The same applies to Fredy Barth, who formerly raced in the WTCC. “The Nordschleife is something special, especially with a car like this. First and foremost we want to finish, then where we are placed in the field will take care of itself.”