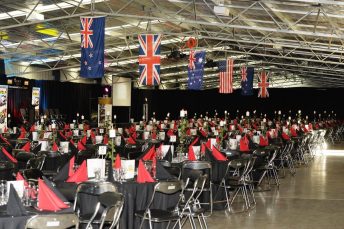 To be held Friday evening January 26, the 25th Anniversary Gala Dinner will be presented by new sponsor, MV Agusta.

Held each year on the Australia Day long weekend, the AMCN International Island Classic is now the largest historic bike event in the southern hemisphere and in its 25th year will be held over the three days, January 26-28.

“We’ve got plenty to celebrate from our first event in 1994, the wonderful years with Ken Wootton at the helm, and for the motorcycle characters that have raced on the International Challenge stage,” said circuit managing director, Fergus Cameron.

“I’m thrilled to welcome MV Agusta to the party! And of course to have Ago, Colin and Troy as our special guests, we’re set for a night of grand tales from the pit lane to the paddock to the start grid and I’m sure, a lot of humour from centre stage.”

Befitting a celebration of 25 years, the Motorcycle Expo will be transformed for the gala, with over 500 guests expected. Esteemed motorcycle journalists Alan Cathcart will lead proceedings, so if you’ve dreamed of knowing the real stories behind three of the biggest names in motorcycling folklore, this is your chance with dinner bookings at www.islandclassic.com.au

This will be Agostini’s fourth visit to the Island Classic and in January he’s bringing direct from Milan Italy, a bevy of beautiful MV Agustas. The four bikes, on display at the Gala Dinner, are all world championship winning four-stroke machines and include two MV’s that Ago rode to world championship success – the three-cylinder 500, which he won the 500cc title on from 1966-1972; and the four-cylinder 350 which saw him beat all-comers on in 1972 and 1973.

Legendary American racer and twice WorldSBK champion Colin Edwards, will also strut the stage with Cathcart. Get ready for a tell-all on his 20 plus years of racing MotoGP, WorldSBK and AMA Superbike, and his plan to steer the USA to their first International Challenge win over the Island Classic weekend.

Australia’s local hero, two times world superbike champion Troy Corser, is flying in from UK for the 25th Island Classic and will lead the Aussie squad. After three years of Australia losing to the Brits, Troy’s hoping to turn local fortunes around and reclaim the International Challenge crown.

No doubt, TC will have plenty to say and we’re hoping for lots of chat on his sensational world superbike career where he amassed a host of WorldSBK records include most pole position (430), most races (377), most podiums(130) and most points (4000).

Naturally, the Wollongong export is the Phillip Island master, being a seven-time winner in WorldSBK at the island between l995 and 2006. Hopefully for Australia, he’ll still have the magic island touch when it comes to International Challenge racing!

The 25th Anniversary Gala Dinner, presented by MV Agusta, commences at the Motorcycle Expo on Friday January 26 at 6.30pm with arrival drinks, before moving to the seated Gala Dinner. It’s a celebration dinner, so dress smart, with collared shirts and closed shoes a must, and no ripped denim in sight.

Tickets are $140 per head and can be purchased by downloading the booking form at www.islandclassic.com.au