LEYBURN (Queensland) – More than 210 historic, classic and performance cars and a grid-full of racing heroes from yesteryear will headline the Historic Leyburn Sprints next month. 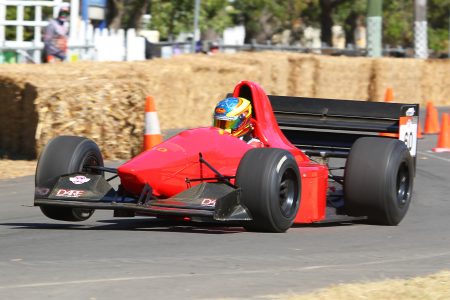 This year’s 24th annual Sprints on 17-18 August will be a special event, celebrating the 70th anniversary of the Australian Grand Prix run on an ex-wartime airfield just outside the town on 18 September 1949.

While no 1949 participants have been found to join the celebrations, Sprints organisers have invited as special guests an impressive line-up of popular drivers from the 60s, 70s, 80s and 90s. They will be on hand to meet their fans at various activities during the weekend.

There are off-track heroes too – Michelmore, Stewart Reid, Dennis Brown, John Hall and Ian Ridell all are past Queensland Rally Champions.

Between them, the guest drivers own many national, State and Bathurst titles.

Leyburn’s extraordinary array of racing, sports and touring cars is always a great attraction, but this year will include two very significant vehicles.

Darling Downs enthusiast Colin Schiller is returning with not one but two MG TB Specials that competed in the ‘49 GP. Col and his daughter Belinda will do the driving of these priceless 80-year-old machines. The oldest entries are two 1925 Austin Sevens.

At the other end of the speed spectrum, the Col Furness Memorial Trophy for outright fastest time has attracted some of the quickest hill-climbers and sprint-racers in Australia.

Lismore’s Dean Amos is chasing a sixth-straight title in his Formula 1-powered Gould GR55B-Judd V8. As well as beating his rivals, Amos’s goal in 2019 will be to finally lower the 1.0 kilometre course record below 40 seconds.

There’s more than motorsport at the Historic Leyburn Sprints, too, with a packed weekend of attractions on offer. The colourful Vintage Caravan display and Sunday’s Shannons Show ‘n’ Shine gathering of around 150 classic road cars and motorcycles are crowd favourites, along with market stalls and food and drink outlets.

Enthusiasts unable to attend the Sprints will be able to follow the action with a live video stream from the website historicleyburnsprints.com.au or on the free Power TV Australia app for Apple and Android mobile devices.

Named CAMS Queensland Motor Sport Event of the Year 2017, the Sprints are community-run and financial proceeds are used to help local organisations and projects.