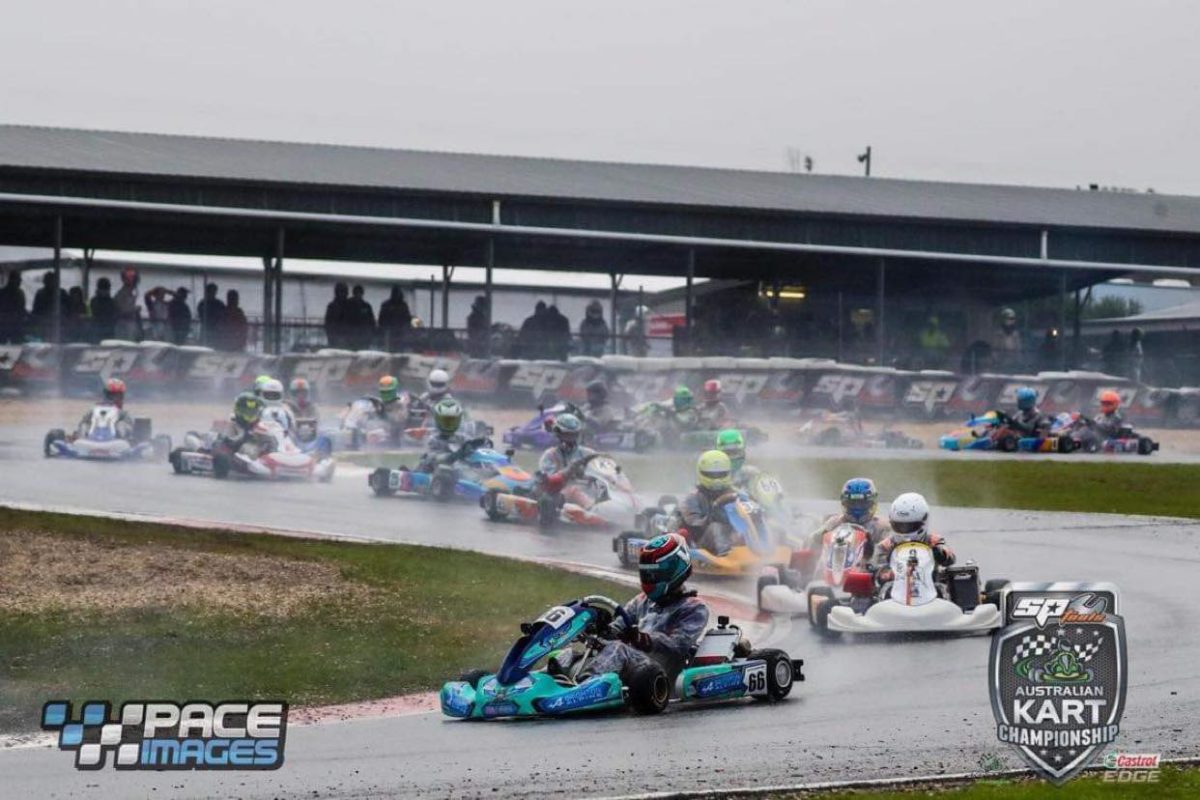 Cooper Stapleton fresh of his Victorian Kart Championship victory made his debut over the weekend in the premier KA2 Junior class. Cooper running in the third round of the SP Tools Australian Kart Championship at the Eastern Lions Kart Club was looking to make an immediate impact. Stapleton running up against a field of near fifty drivers was ready to take on the countries best.

Stapleton used Friday practice to get up to speed as much as possible and put himself in the upper fifty percent for qualifying. The Brighton Alpine backed entry was able to put himself immediately in the top twenty and was looking to make his way up the field. Cooper continued to push and set times inside the top fifteen to get himself further up the grid. Stapleton was able to set the thirteenth fastest time overall and was looking to the opening heats of racing.

The heavens opened up Friday night and Stapleton’s opening heat was to take place on a wet track. The A1 Engines Motorsport backed entry got a great start and was able to jump up to seventh spot off the start. Cooper was learning the craft on his wet tyres, having never driven on them before in a top level class. Stapleton dropped a couple of spots across the race but was still able to come home inside the top ten in position nine overall.

Stapleton was once again under tough wet conditions in heat two and was looking to make up spots. The R & D Signage Solutions backed entry got another excellent start moving up to seventh spot and looking to challenge the top five. Cooper had an incident occur in front of him where he unfortunately lost four spots and dropped down outside the top ten. Stapleton crossed the line in position eleven and this had him starting out of position six for his third heat.

Cooper was starting out of position six in the opening heat on Sunday morning but with two mechanical failures occurring in the roll arounds, Stapleton was now starting off the front row. The Pro Floor backed entry unfortunately didn’t quite have the set up needed to challenge for top positions and Cooper dropped outside the top five. Stapleton in his best result of the weekend was able to come home in position seven overall, grabbing more experience and more points for his starting position.

Stapleton was starting out of position eight for the fourth heat but was unfortunately ran off the circuit and dropped back to position twenty eight. The Harrison Steele Salon sponsored entry got his head down and started charging his way through the field. Cooper had quickly made his way into the top twenty and was looking to move further up the field. Stapleton did a great job to recover thirteen spots and cross the line in position fifteen overall in a brilliant fightback.

On full points, Stapleton was starting inside the top ten on the outside of the fifth row. The Connect Sport Australia started well and was on the edge of the top ten before some mud flicked up on his helmet hurting his vision and causing him to run off the circuit. Cooper re-joined in position twenty one but was determined to get back on task and make some spots up throughout the race. Stapleton was able to come across in position eighteen overall to round out his weekend!

Cooper spoke post weekend on his first weekend in the premier KA2 Junior class. “Considering it was my first KA2 event l am happy with finishing all the races and being near the front part of the field most of the time in tough conditions. I love racing these karts”. Stapleton will be back on circuit at the fourth round of the SP Tools Australian Kart Championship at the Emerald Kart Club in July.