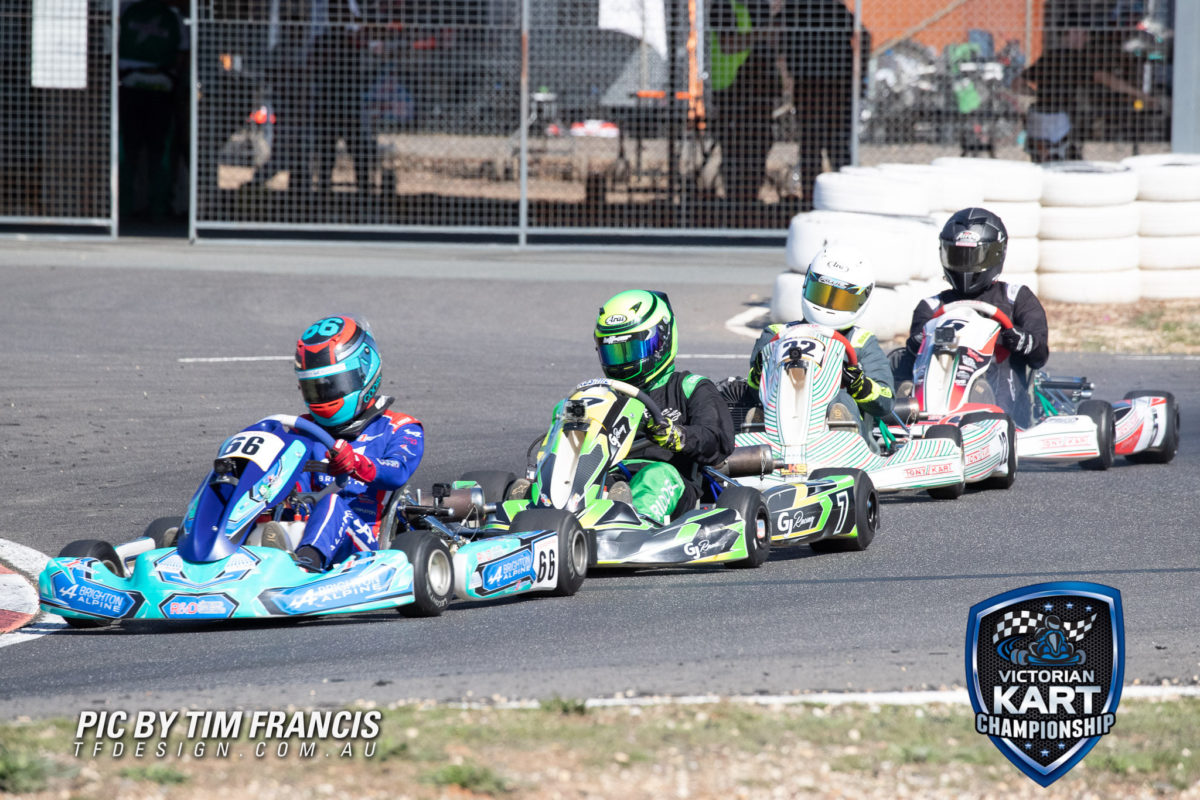 A1 Engines Motorsport took a team of twelve drivers across seven classes to the Victorian Kart Championship’s over the weekend. Team owner and manager Brett Arnett was there to lead the team to try to make and add more state championship glory to his ever-growing resume. Arnett had multiple chances using his A1 Engines Motorsport powerplant to come home with victory.

Cooper Stapleton and Lucy Sidwell had the A1 Engines Motorsport underneath them in the KA4 Junior Heavy class. Stapleton qualified on the front row of the grid and once racing started didn’t look back taking a clean sweep of the Victorian State Championship. Stapleton took out his maiden state championship, driving away to a comfortable victory in a dominate display all weekend. Sidwell qualified just outside the top twenty in position twenty-two and had done a great job to make her way up to position fourteen by the conclusion of heat three. An unfortunate incident in the final resulted in a DNF stopping the young lady racers charge.

Zackary Thompson and Bodhi Bright were ready to take on the KA3 Senior Medium class using their A1 Engines Motorsport power. Thompson was able to put his entry on pole position with Bright not far behind in position five showing both drivers had a strong chance. Thompson took out two of the heat wins and a second place in the other, putting him off pole position for the final. Bright had an unfortunate DNF in heat one but a fifth place in heat two and seventh in heat three displayed the pace the young driver had. Unfortunately, the final was a case of what could have been for the A1 Engines Motorsport team. Bright while looking to make his way into the top five was taken out of contention and had to watch majority of the final from the sidelines. Thompson led eleven out of the twelve laps in the final but had a coming together on the final lap resulting in him dropping down the order to position ten, no doubt a state championship going begging!

A1 Engines Motorsport had a double driver attack on the young Cadet 9 category in Jackson Brasher and Sam Sidwell. Brasher was able to qualify up on the front row with Sidwell also inside the top ten in position nine. Brasher came away with a second and position five in the two heats on Saturday, putting him near the front to start Sunday. Sidwell got up as high as fourth on Saturday showing he also had great speed. Brasher had a Sunday to forget, being taken out in both races in a huge disappointment after the pace the young driver had to offer. Sidwell continued his charge forward and came home just off the podium in position four in a great recovery from qualifying.

Liam Ford was the sole A1 Engines Motorsport competitor in the huge TAG 125 Light and X30 Light field. Ford qualified just outside the top ten in position eleven. Liam had a great Saturday moving up four spots in heat one and two in heat two having him further up the grid. Ford had a heart-breaking day Sunday, running in the top five in both races before a crash in heat three and blown engine in the final resulting in him finishing on the side lines. Liam qualified in position thirteen in X30 and had a mixed start with a crash in heat one hurting his chances. A sixth in heat two was the highlight of the weekend with both heat three and the final not going the young driver’s way. Ford was able to recover to position nineteen by races end from being outside the top thirty.

William Thompson was the sole driver in the forty-kart field of KA4 Junior Light. Thompson did a great job qualifying in the top ten and then was able to move up into position nine in both heat one and two getting himself further up the grid. Will just missed the top ten in heat three but fought his way back for his best finish of the weekend in the final in position eight!

Phillip Stradbrook was the final driver to take the track using A1 Engines Motorsport power in the Victorian Combined Masters class. Stradbrook qualified inside the top five and came home in position seven and six in his Saturday races. A DNF on the opening lap of heat three put Phil down the order for the final but he was able to fight his way back up the order. Stradbrook come home with a sensational third position and on the podium for A1 Engines Motorsport.

Team owner and manager Brett Arnett spoke post weekend. “It never gets old winning these big titles. Cooper has been there or there abouts for quite a while and deserves the blue plate. Tough to watch the final lap for Zack but we know he’ll get another chance and it was great to see Phil up on the podium”. A1 Engines Motorsport will be a team to watch for the rest of season 2022.