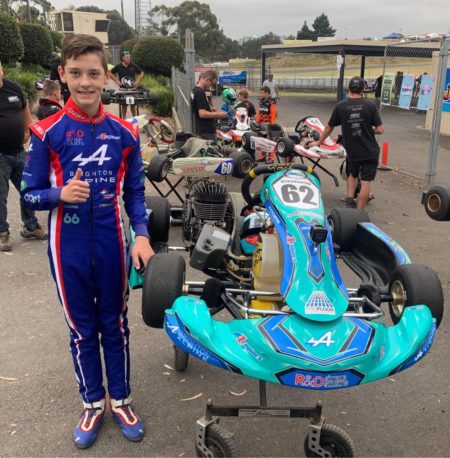 Stapleton hit the track for qualifying and was looking to get as far up the grid as possible. The Brighton Alpine backed entry put himself in the battle with track position always being an issue in the capacity thirty six kart field. Cooper was putting himself right in the battle but was struggling with the overall pace of the front runners. Stapleton set a time fast enough for position nineteen. The team looked over qualifying and tuned up the kart for the opening heat.
Stapleton got a great start in the opening heat jumping up four spots on the opening lap, inside the top fifteen. The A1 Engines Motorsport powered driver looked quick and was trying to move his way up through the field. Cooper pushed forward even further and managed to get his way inside the top ten with excellent pace and a great improvement from qualifying. Stapleton crossed the line in position ten but had a drop down bumper penalty relegating him to position twelve. The team were happy making up seven spots and now look forward to heat two.

Heat two was another great start for Stapleton, as there was a big opening lap incident which the young driver was able to avoid. This put him up six spots on the opening lap into position thirteen. The R & D Signage Solutions backed entry continued to move his way through the field and got inside the top ten, once again showing excellent race pace. Cooper crossed the line inside the top ten in position nine but unfortunately dropped down two places due to a drop down bumper penalty. These results had the young driver starting a lot further up the grid for the third heat.

Heat three was full of action as Stapleton got a poor start dropping back down to position fourteen. With a red flag interrupting the race, Cooper was looking to the restart to make up as much ground as possible. The Pro Floor backed entry got a great restart and burst his way inside the top ten once again. Stapleton continued to show electric pace, passing karts at will and making his way up inside the top ten and pushing the top five. In his best result of the weekend Cooper crossed the line just outside the top five in position six in his best showing off the weekend and Saturday!

Stapleton was once again starting further up the grid in heat four. The Harrison Steele Salon backed entry sat in sixth spot the first half of the race before making a move and putting himself inside the top five drivers. Just when Cooper looked like he was on for his best result of the weekend the young driver was shuffled back in the fierce racing. Stapleton went backwards in the top ten but regained his composure to come home in another strong eighth position. This had the young driver out of position six for the final.

The start of the final was going to be all important as Cooper was on the outside of the front row. Stapleton had his worst start of the weekend finding it very tough from the outside of the third row. The Connect Sport Australia backed entry went back to position twelve and had plenty of work to do over the final. Cooper made his way back into the top ten and moved up as high as seventh in the final in a great recovery. Stapleton was once again in a tough battle at the back end of the race and came home with a final finish position of ninth spot!

Cooper spoke post weekend about his first time racing in the KA4 Junior class. ““Overall l was happy with how the event went”. Cooper’s father Troy also spoke of the great recovery from qualifying.” Our goal was to finish all the races and hopefully get into the top ten and Cooper made it happen after a tough start in qualifying. We will be working hard on refining the package for the next round”. Stapleton now looks to the next round of the SP Tools Australian Kart Championship in South Australia.