The high-flying fan favourite Stadium Super Trucks have announced they will make their first ever trip to New Zealand as part of the 2020 ITM Auckland SuperSprint. 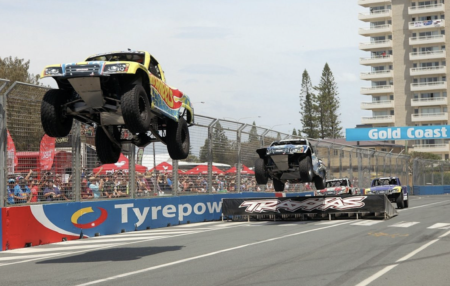 Next year’s ANZAC Round, which will run from 24-26 April at Pukekohe Park Raceway, will also coincide with the 20th running of a Supercars Championship event in New Zealand.

The stadium trucks have grown a massive following around the world, entertaining millions of fans as drivers go head-to-head, racing around world famous circuits and sending their 600horsepower beasts into the air.

The announcement that Stadium Super Trucks will make a maiden trip to NZ was made live on Supercars Trackside in Pukekohe, along with news the category will soon announce a full calendar for 2020.

It has been announced that they will race at next year’s Superloop Adelaide 500 and Vodafone GC600 as well as the ANZAC Round in New Zealand. At least five other rounds in Australia are expected to be announced over coming months.

Super Trucks have been a crowd sensation in Australia since first racing at the Clipsal 500 back in 2015.

Nathan Cayzer from Stadium Super Trucks said drivers are thrilled to be heading to Pukekohe in 2020.

“We are extremely excited to be taking Stadium Super Trucks to New Zealand for the first ever time as part of Supercars ANZAC Round next year,” Cayzer said.

“To be able to build on the great news that the series is back racing in Australia in partnership with Supercars and that we are heading to Auckland is fantastic for out category and the fans.”