Sprintcars turn it on at Grafton

Sprintcars turn it on at Grafton 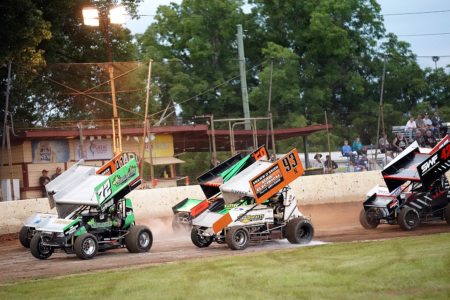 The Sprintcars made a popular return for the first time in over a decade to Hessions Auto Parts Grafton Speedway on Saturday night, and it saw veteran racer Mick Turner claim the feature-race spoils.

In front of a large crowd, Turner, from the Central Coast of NSW, managed to convert his pole position start into the win after he had led the entire 20-lap feature race journey. For Turner, it was his maiden Sprintcar feature race win during his sporadic stints in the class since debuting in the 1996-97 season.

“I really enjoyed my night at Grafton Speedway as it is a real driver’s track, and to win my first Sprintcar feature race topped off my night,” expressed the 53-year-old Turner.

“To win my first Sprintcar feature race has done a lot of good for my confidence, especially after being out of the driver’s seat for the past six seasons, and I’m looking forward to the rest of the season with the Dick Thompson-owned team.”

Following Turner across the finish line in the feature race was Sydneysider Mark Attard, who challenged Turner briefly in the middle stages, before going on to finish in a solid second. One of the pre-race meeting favourites Mick Sauer managed to complete the podium finishers in third place.

Earlier in the night, the heat-race action saw wins shared between Turner, Sauer and Elliott. Lawler topped the time sheets in qualifying time trials and Lawler’s team-mate Turner took out the pole shootout.

The next two race meetings at Grafton Speedway are going to be held over the Christmas-New Year period, with the V8 Dirt Modifieds headlining the action on December 28 and January 3. The support classes on both nights are going to consist of AMCA Nationals, RSA Street Stockers, RSA Four Cylinder Sedans and RSA Junior Sedans.

Grafton Speedway would like to thank Hessions Auto Parts for their support throughout the 2021-22 season. Based in Grafton, along with their new store location in nearby Coffs Harbour, Hessions Auto Parts stock a wide range of parts and accessories at competitive prices. To find out more about Hessions Auto Parts, you can contact them on 0266 423 085 (Grafton) and 0256 456 361 (Coffs Harbour) or visit their website at www.hessionsautoparts.com.au.