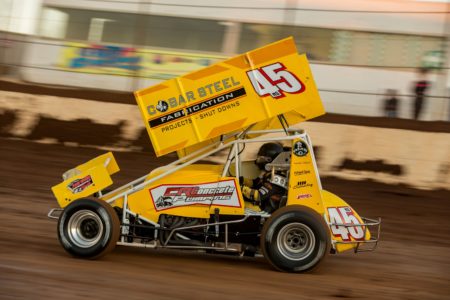 After an absence of 13 years, the thundering 410 Sprintcars will be making a much anticipated return to Hessions Auto Parts Grafton Speedway on two occasions during the 2021-22 season.

“Since taking over the promotion of Grafton Speedway three seasons ago, one of my goals was trying to get 410 Sprintcars back on the track, and it’s very exciting to have them here for two race meetings as a part of next season’s calendar,” he explained.

“Our local fans have been crying out for the opportunity to have 410 Sprintcars back at Grafton Speedway and now those wishes are going to be a reality next season, on not one but two occasions during the season.”

“How that night came about was after I asked Mick (Corbett) if I could do a few hot laps to shakedown my new car, and it was good to get out there,” Stephenson commented.

“Although it was two tentative hot lap sessions, the crowd absolutely loved seeing it, and I’m looking forward to getting behind these two events next season and hopefully all of us drivers can put on a good show for them.”

The 2007-08 season was the last time 410 Sprintcars appeared at Grafton Speedway, and that season saw two Outback Outlaws Series rounds held there, with Queenslander Brodie Tulloch winning the feature race on the first occasion ahead of Sydney’s Mick Matchett and Queenslander Brock Dean, while the second occasion resulted in Matchett coming out on top by outpacing Brodie Tulloch and Sydney’s Anthony Vysma to the chequered flag.