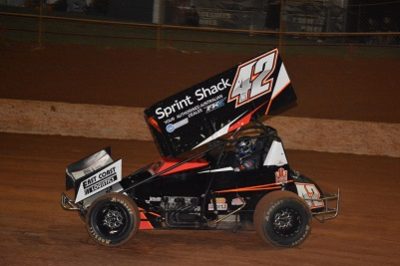 The wait is over! The 2018/2019 speedway season will get underway this Saturday night (September 22) at Ausdeck Patios Archerfield Speedway with the opening round of the East Coast Logistics Sprintcar Track Championship. More than 30 Sprintcar competitors are locked in for the event, including defending track champion Andrew Scheuerle and a gaggle of go-getters looking to deliver an emphatic declaration of their championship intentions in a way that only an opening round victory will achieve. Also on the program will be the opening rounds of the Polar Ice Midget Track Championship and the Brisbane Formula 500 Club Championship, plus Compact Speedcars, Fireworks and Monster Trucks. Making their first ever appearance at Archerfield, big-wheeled brutes Buddy and Raptor will unleash a spectacular display of Monster Truck mayhem to kick off what is going to be a massive season of action at Queensland’s home of speedway.

Joining Scheuerle on track for the opening round of the East Coast Logistics Sprintcar Track Championship will be feature race winners such as Lachlan McHugh, Mitchell Gee, Peter Lack, Brent Kratzmann, Allan Woods, Brent Aprile and NSW’s Michael Saller, an octet of action heroes who head to Archerfield on the back of contrasting fortunes in Toowoomba last weekend. Using the Toowoomba event to fine-tune their preparations for their track championship campaign, Kratzmann and McHugh enjoyed a good night in finishing third and fourth respectively in the feature race, while Lack and Gee were much less fortunate and crashed out during the heats. Saller was also out of luck, wiping out on the opening lap of the main event and is no doubt relishing a return to Archerfield, the track that has served as a second home in recent years and on which he produced his maiden feature race win last season. Scheuerle finished the Toowoomba event in fifth and Aprile secured a very solid seventh in his return to competition after 18 months on the sidelines, with Woods annexing eighth to set the scene for some stellar competition when the field is unleashed on the Archerfield clay.

Of course, with more than 25 other drivers nominated for competition, anything can happen and, rest assured, most definitely will. Amongst the entries are South Australia’s Glen Sutherland, Gold Coast gun Cody Maroske, Australian Dirt Modified champion Kevin Britten and series stalwarts such as Brock Dean, Dan Murray and Mark Pholi, while Stewart Craig looms as a dark horse following his recent success in the north of the state. Having journeyed to Cairns Speedway during the Archerfield off-season, Craig subsequently emerged as a feature race winner, leading home the likes of Scheuerle and Woods in the process. As seems to be the case at the start of each season, a new batch of talented rookie racers will be joining the fray for the first time and, amongst those making their category debut this Saturday night are Tim Farrell, Geoff Davies and teenager Trent Vardy, who is making the step up from the Junior Formula 500 ranks.

Whilst the Sprintcar teams have obviously been working hard during their break in competition to prepare for the season opener, the other categories on Saturday night’s program are down in numbers, however there is some serious quality amongst the nominations. Three-time national champion Adam Clarke from Newcastle headlines the field for the opening round of the Polar Ice Midget Track Championship, facing off against the likes of Queensland champion Troy Ware, former Polar Ice Series champion Rusty Whittaker, fellow New South Welshman DJ Raw and the hard charging Darren Vine aboard the Ian Boettcher Race Parts Esslinger/Cool for only the second time after a stunning debut in the final round last season. The field might be small but there is no doubt the locals will be determined to upstage their southern rivals in a bid to secure the early advantage in the chase for the Polar Ice Championship.

Having been two of the most consistently solid categories with regard to car numbers last season, the fields for both Formula 500s and Compact Speedcars are smaller than expected, but again there is plenty of talent in their respective line-ups. Australian champion Liam Williams is a clear favourite for round two of the Nupave Formula 500 Series, having dominated last season and fresh from winning the opening round in Toowoomba last weekend. Whilst Williams’ biggest threat in this field would typically be expected to come from the likes of Kristin Brown, Mitchell Whittaker and Ryan Skennar, young Tarhlea Apelt has already proven that she will be a force in her first season out of the Junior ranks, beating the aforementioned quartet to win the opening heat race of the season last Saturday.

With several big guns missing in action, it may also be a rookie who proves the driver to beat in the Compact Speedcar events with Bodie Smith looking to make his mark. In his first ever appearance in the Compact Speedcar ranks at the final meeting of the 2017/2018 season, Smith was considerably quicker than his rivals and had surged into the lead of the feature race before a mechanical issue denied him victory with just two laps to run. Glenn Wright, Trent Usher, Dave Collins and Emma Harris are consistent front runners who loom as the most likely to keep Smith from making his first foray into victory lane.

Making their first ever appearance at Archerfield, Buddy and Raptor are primed to deliver a Monster Truck experience beyond anything seen before and, with Formula 500 Juniors and fireworks also on the program, a huge night of on-track action and family entertainment is assured. Gates open at 4.00pm (3.30pm for online ticketholders) with early racing from 5.00pm. Sprintcars hit the track for time trial qualifying at 5.30pm and the main program gets underway at 6.00pm.