Sprintcars back for Easter action

Sprintcars back for Easter action 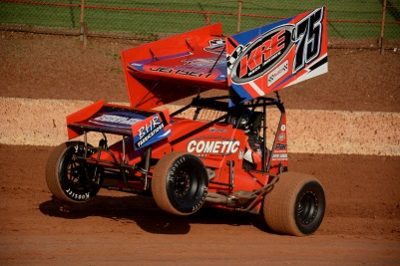 It seems like forever since the last time Sprintcars were unleashed on Ausdeck Patios Archerfield Speedway, with wet weather playing havoc on the season schedule. However, everything changes this Saturday night (March 31) when more than 40 V8 monsters are unleashed for round two of the Easter Triple Challenge. What better way could there be to spend Easter Saturday night than watching Queensland’s best Sprintcar exponents locked in combat against the interstate invaders hell bent on taking the Triple Challenge trophy? That’s a rhetorical question obviously, because nothing could be better than seeing local stars such as Luke Oldfield, Andrew Scheuerle, Lachlan McHugh, Mitchell Gee, Callum Walker, Peter Lack and 30 fellow Queenslanders taking on former national champion Robbie Farr and the likes of Michael Saller, Andrew Wright, Jackson Delamont and more at Queensland’s home of Sprintcar racing.

Having spent much of his season competing in Sydney and at Murray Bridge in South Australia, Farr will no doubt relish the tougher competition he will encounter north of the border over three consecutive nights. The Easter Triple Challenge kicks off in Toowoomba on Friday night (March 30) and concludes in Lismore on Sunday evening (April 1), with Archerfield’s Saturday fixture also featuring the Queensland Compact Speedcar Championship, Wingless Sprints and Formula 500s in a massive open wheel program.

In addition to the sextet of local speedsters already identified as those whose season form thus far suggests they will be the pacesetters come Saturday night, there are plenty of others with the credentials to feature at the top end of the results, including Ben Hilder, Brent Kratzmann, Darren Jensen, Mick Sauer, Jayden Peacock, Cody Maroske and former Archerfield track champion Bryan Mann. Each driver will contest time trials and two rounds of heats to accumulate points towards qualification into the 40-lap feature race, which pays $4000 to the winner. The top 16 point scorers will qualify directly into the 40-lap feature event, while the drivers who qualify in positions 1 to 8 will contest the Pole Shootout over three rounds, from which the winner of the Gold Shootout will secure pole position in the big show. Those competitors who don’t qualify directly into the feature race will chase the remaining spots by contesting the B Main and/or C Main.

In what has been a standout season for the category thus far, Compact Speedcar competitors are chasing state championship glory on Saturday night in what promises to be a hotly contested event given the number of drivers who have emerged as feature race contenders every time they hit the track. Whilst Darren Vine will be absent after his heavy crash last weekend, category veterans Robbie Stewart and Wayne Corbett have earned the right to pre-event favouritism, however with Dave Collins, Trent Usher and Tim Farrell having all won feature races this season, they will be supremely confident of establishing a new pecking order within the Compact Speedcar ranks. Others who have impressed in recent weeks and should feature in any battle pack for a place on the podium include Glenn Wright, Emma Harris, Richard Treanor and Nick Gannon.

The Formula 500s turned on the action last weekend and are returning to again showcase their high velocity heroics. In the absence of Australian champ Liam Williams with interstate commitments, look for James Kennedy, Kristin Brown, Charlie Brown and Ryan McNamara, who stormed from 18th to fifth in the feature race last weekend, to become embroiled in some spirited competition to fill the void. Ryan Skennar, Nick Hodges and Kurt Wilson are also proven front runners in a category that brings the action every time they take to the Archerfield track.

The Wingless Sprint events are shaping as a Queensland versus New South Wales showdown with eight drivers making the trek from south of the border. Brant Chandler has been the standout at Archerfield this season and he will no doubt relish the extra competition, all the while trying to fend off the challenge that he will invariably face from the likes of Cody O’Connell, Brad Keiler, Paul Robinson and the rest of his regular combatants.

Formula 500 Juniors are also on the program, which will feature more than 100 competitors. Gates open at 4.00pm and early racing gets underway from 5.00pm, with Sprintcar time trials scheduled for 5.30pm and the main program set to launch from 6.00pm.