Sprintcars back to Archerfield Speedway

Sprintcars back to Archerfield Speedway 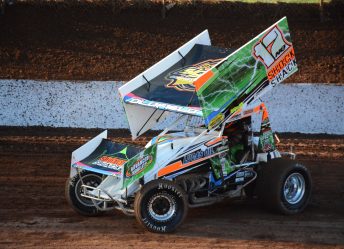 Luke Oldfield will be in action at Archerfield Speedway

MEDIA RELEASE: After an extended absence of some five weeks during which some teams took the opportunity to refresh and regroup, while others headed south to contest major events in New South Wales and Victoria, Sprintcars return to Ausdeck Patios Archerfield Speedway this Saturday night (February 18) for round eight of the East Coast Logistics Track Championship. No other speedway venue in the state delivers the consistently good racing that Archerfield produces each week and with 30 nominations received so far, it certainly seems as though the drivers are delighted to be back in action at Queensland’s home of Sprintcar racing.

However, this Saturday night will be more than just Sprintcars with a big field of Dirt Modifieds also entered, ensuring that there will be 50 V8 race cars hitting the track and, with Lightning Sprints, Formula 500’s and Ford v Holden v Sigma sedans also on the program, the scene is set for another fabulous night of dirt track action.

As always, the Sprintcar line-up is a potent mix of the old and the new; the fearlessness and raw talent of youth verses the guile and knowledge that only comes with experience. It is always a fascinating mix and this weekend promises to be especially interesting given the break in competition that should have all teams primed and ready to perform at the highest level.

Luke Oldfield has been the standout performer so far this season and it is only his absence from round four with an engine problem that has kept him from assuming the championship lead. In addition to his ECL series wins, Oldfield also prevailed in World Series Sprintcar competition in November and is one of only two local competitors to finish ahead of World of Outlaws superstar Donny Schatz in a Sprintcar feature race at Archerfield this season.

The only other track championship contender to defeat Schatz was Gold Coast-based teenager Lachlan McHugh, who stormed to a career-best WSS preliminary feature win on January 6, leaving Schatz, Australian champ Kerry Madsen, defending WSS champ Jamie Veal and current World Series points leader James McFadden in his wake. Continuing his great form, McHugh contested his first ever Australian Sprintcar Championship in Sydney last month against more than 100 other drivers from across the country and performed superbly to finish 12th overall in the feature race.

So, will it be the experience of Oldfield, defending track champion Andrew Scheuerle, Bryan Mann, Peter Lack, Kevin Titman or Brent Kratzmann that prevails in the 30-lap feature race, or will it be a young gun such as McHugh, Mitchell Gee (who scored his maiden feature race win here earlier in the season), Callum Walker, Jayden Peacock, Dylan Menz, Ben Hilder, Brett Minett or Cody Maroske who emerges triumphant? Perhaps somebody else will rise to the challenge and stake their claim because there are certainly plenty of candidates to be considered as potential feature race winners.

Dirt Modifieds are also out in force this weekend with a genuine QLD versus NSW battle looming as the field comprises 10 cars from each state. With Australian champ Kevin Britten stepping into Sprintcars for this weekend, the contest becomes a much more open affair with several potential feature race winners amongst the nominations. Former national champions Andrew Pezzutti and David Clark are obvious contenders, while Lee McKinnell has also earned a place amongst the pre-race favourites with some exceptional results of late. Mitchell Randall was outstanding here in the Paul Britten Memorial event in January, finishing third behind Kevin Britten and Pezzutti, with the likes of Trent Schofield, David Ohl, Garry Wathen, Chris Corbett and Nick Knott also expected to feature in the thick of the action.

As always, the Formula 500s will provide some great competition in the latest round of their KRE Race Engines Championship Series, with gates opening at 4.00pm. Early racing gets underway at 4.45pm, Sprintcar time trials are from 5.30pm and the the main program, featuring round eight of the East Coast Logistics Sprintcar Track Championship plus Dirt Modifieds, Formula 500s, Lightning Sprints and Ford v Holden v Sigma sedans, kicks off at 6.00pm.