Sprintcars are back on track

Sprintcars are back on track 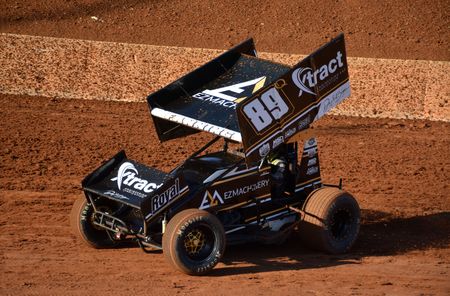 Following a break in competition in the wake of a hectic Christmas/New Year schedule, Sprintcars are back in action at Archerfield Speedway this weekend, contesting round seven of the East Coast Logistics Track Championship on Saturday night (February 6). Following their impressive display in the Firecracker 1000 a few weeks back, Modified Sedans have been added to the program, with AMCA Nationals also featuring in round five of their Shock Absorber Therapy Track Championship. RSA Sedans, Stockcars and Ford vs Holden vs Sigma sedans will also feature

Of the 35 Sprintcar competitors nominated for the event, it is quite remarkable that only three have found themselves in victory lane at Archerfield so far this season, while only five have featured on the podium at all. Such has been the dominance of Queensland champion Lachlan McHugh, who has won eight of the ten feature races contested thus far, including the two most recent events that formed part of the Super Seven Series, that nobody else has really been able to make their mark on the season as yet. Cody Maroske was victorious early in the season when McHugh crashed out but, other than a breakthrough win from Callum Walker in the most recent round of the ECL track Championship, nobody else has yet found a way to deny McHugh the spoils of victory. Given that McHugh has used this break in local competition to contest a series of events interstate, picking up another couple of feature race wins along the way, his rivals will need to have used their downtime very effectively in perfecting their preparations and developing a strategy for success if they hope to bring about a change in the pecking order. Obviously, Walker has proven that such success is attainable and Luke Oldfield has been absolutely dogged in his pursuit of McHugh, consistently emerging as his biggest threat to finish on the podium seven times. Whilst it seems inevitable that Oldfield will find himself in victory lane at some stage this season, the momentum McHugh brings from his interstate foray will only serve to make him an even tougher proposition.

Whilst McHugh, Walker and Oldfield have dominated the results thus far, defending track champion Aaron Kelly has clearly been the best of the rest, having finished inside the top five on no less than five occasions, including a podium result in the opening round. Tasmania’s Jock Goodyer, meanwhile, is yet to finish outside the top five at Archerfield this season and, having already featured on the podium twice from just four starts, he also returns to Brisbane on the back of some strong results interstate. In a season dominated by a select few, the only other drivers in the field to have finished inside the top-five in a Sprintcar feature race are Randy Morgan, Brent Kratzmann, Dave Fanning and Ryan McNamara, so maybe this weekend will see one of this group fight their way onto the podium, or perhaps somebody else will emerge from the pack to upstage those who have thus far dominated the results with little resistance.

Following the action and excitement that emanated from the Firecracker 1000 last month, Modified Sedans drivers have responded to the opportunity for an additional outing at Archerfield with a strong 20-car field secured despite the short notice. Leading the charge will be the McDonald brothers from Toowoomba – Nathan and Shane – who finished first and third respectively in the Firecracker feature race, with another Toowoomba-based runner in Rodney Pammenter looming as one of their biggest threats. Pammenter led the Firecracker feature momentarily before a flat tyre intervened, a misfortune that will no doubt have him fired up to make amends this weekend. With a last-lap scramble dropping him outside the top five in the Firecracker feature, Darran Lester will be keen to bounce back with a podium result this time around, while category stalwart Greg Worling is another expected to feature prominently in proceedings.

The four completed rounds of the Shock Absorber Therapy AMCA Nationals Track Championship have delivered some highly competitive racing and there is nothing to suggest that this weekend will be any different. Whilst Bruce Marshall and Steve Potts have shared the feature race spoils thus far with two wins apiece, none of their successes have come easy, which is to be expected when the likes of Steve Price and national champ Matt Hardy are amongst the starters. All four are in the 17-car field this weekend, along with a couple of speedy namesakes in Nathan Tomkins and former state champ Nathan Durston, who will be making his first Archerfield appearance for the season.

Dave Sansby and two Taylors in Michael and Daniel head the RSA Outlaw Sedan entry list, with Matthew Hannigan and Aaron Buchanan likely to lead the charge in the Limited Sedan ranks.

Gates open at 2.00pm for competitors and online ticket holders only, with general admission ticket sales and entry from 3.30pm. There is no reserved seating for this event, however all patrons must maintain 1.5m social distancing. Early racing will hit the track from 5.00pm and the main program, which will also feature Stockcars and Ford vs Holden vs Sigma sedans, will get underway from 600pm.