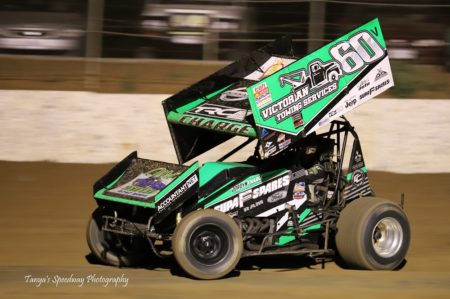 This Saturday night the All Star Sprintcar series returns for their second show of the season at Horsham’s Blue-Ribbon Raceway to share top billing with over fifty Wingless Sprints who will saddle up for their Victorian Wingless Sprint state title. The action starts from 5.30pm with some Sedans from yesteryear in the form of Torana’s, EH Holdens, FJ’s and Valiant’s expected to buzz around Horsham.

The top eight All Star Sprintcar drivers as they stand in the point score, are amongst the entrants this Saturday night with victory on their mind. Charles Hunter the points leader and his closest challenger Jordyn Charge are just twelve points apart at the top of the table. Both are more than capable of winning a feature event whilst Paul Solomon in next on the points table and now a veteran of the class and a two-time series champion over its years.

Brad Warren a man who can and does drive anything and currently races for the McClure outfit out of Mildura, is another man to watch and sits close enough to the top to throw a cat amongst the pigeons with a victory this weekend. Throw in another veteran Phil Lock who recently returned to the fold, Zac Farrer and a host of youngsters looking to make a name for themselves with the Wings up top such as Todd Mole, Corey Sandow, Jordan Abbott, and Todd Hobson, it should be a very entertaining night of Sprintcar action.

Co-main event this weekend is the Victorian Wingless Sprintcar title with over fifty entrants.

A huge list of contenders is entered for this year’s Victorian title with so many of the field a fair dinkum chance to win that we must apologize before we mention even a few of them because there will be people feeling like their name should be mentioned in the conversation.

Local fans will keep an eye on the likes of Jeremy Beddison and Steven Hateley amongst others and Hateley over the last twelve months has kept his nose towards the front of the field. Wingless Sprints is one of the larger classes of racing, and to win this one is very prestigious as you can go through life knowing you came out on top in a fifty-car sized field.

Not to be left out, the Vintage Sedans who are having some ‘spirited’ demonstrations will hit the track with a mixture of cars from the old days. Working through Super Saloons, earlier Super Sedans, Heavy Sedans, EH Holdens, Valiant’s, Torana’s etc. there is lots of very much-loved old-time race cars to enjoy out on track.

All the action is at 1650 Blue Ribbon Road, Kalkee with racing from 5.30pm. Gates to the public will be opened at 3.30pm. The Pit Entrance for competitors will be opened from 11am.