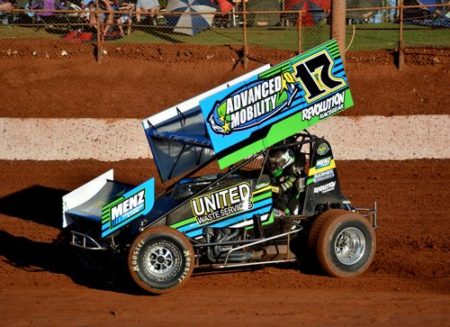 Inclement weather is the arch enemy of any speedway track operator and last weekend it was the enemy that prevailed when heavy rain forced the cancellation of racing at Archerfield Speedway, leaving competitors and fans alike to settle for a Saturday night spent doing something far less exciting than being trackside for a night of first class dirt track motorsport entertainment. Fortunately, such a sacrifice is only short term with racing scheduled at Archerfield again this Saturday night (December 19) with an almost identical entry list confirmed for round four of the East Coast Logistics Sprintcar Track Championship. However, sharing the bill on this occasion is the Queensland Midget Championship, with over 30 cars from Queensland and interstate to hit the track, with Wingless Sprints also out in force for round five of their Club Championship.

With no racing last weekend, obviously nothing has changed with regard to the state of play in the ECL Sprintcar Track Championship, with Lachlan McHugh and Cody Maroske the only two drivers to have found their way into victory lane at Archerfield thus far this season. McHugh has done so on four occasions, with Maroske taking advantage of McHugh’s early demise in round one to become the only other competitor to thus far enjoy the spoils of feature race success. As a result of last weekend’s washout, Luke Oldfield has had to wait another week to try and secure his first feature win for the season, having endured a remarkably consistent (and no doubt frustrating) run of results that has landed him inside the top three in every Archerfield Sprintcar feature race this season which, combined with McHugh’s domination at the front of the field, has left very few opportunities for others to step into the spotlight. In fact, other than McHugh, Oldfield and Maroske, only three others drivers have appeared on the podium thus far. Callum Walker has done so on two occasions, with Kevin Titman and defending track champion Aaron Kelly the only others to feature inside the top three. Despite the fact that 40 drivers have contested one or more nights of competition at Archerfield so far this season, Randy Morgan and former Queensland champ Mitchell Gee are the only others in the field to have finished inside the top five in a feature race, with the likes of Dylan Menz and Brent Kratzmann having been unable to translate strong qualifying performances into feature race results.

A 31-car field has nominated for this Saturday night, with the only change from last week being the addition of Dave Fanning. Tasmanian young gun Jock Goodyer remains committed to his Queensland tour and, despite the fact that this will be his first race meeting for the season, he will be a serious threat to the locals. Goodyer is the current Australian Formula 500 champion and was voted the Speedway Australia Open Wheel Competitor of the Year following a remarkable rookie season in the World Series Sprintcar Championship competition that saw him finish fourth overall. Goodyer will remain in Queensland to contest the upcoming Super 7 Series to be staged between January 2 and 16 at four different venues, three nights of which are scheduled for Archerfield on January 3, 8 and 9. With racing yet to resume in Sydney, Lachlan Caunt will again journey north to tackle the challenge of mastering the Archerfield circuit, having experienced mixed fortunes in the previous two rounds of the series.

The only thing that has prevented the mighty Midgets from serving up their very best racing so far this season has been a struggle to consistently deliver a full field of cars, however there will no such concerns this weekend with 34 competitors nominated to contest the Queensland Championship. Included in the field will be former national titleholder Kaiden Brown and another seven interstate invaders, all hell bent on sequestering the championship trophy across the border. Of these, Dean Meadows impressed with a top-five finish here a couple of weeks ago, while Matt Jackson has accumulated a strong record of success at home and on the road. With the biggest field of locals so far this season also locked in, the scene is set for an epic showdown for the crown as TFH Track Championship front runners in Rusty Whittaker, Darren Vine, Brad Dawson and Bodie Smith lead the way in defending their home state title. The first Midget outing for the season from Brock Dean will certainly be a welcome addition to the field, while Charlie Brown will provide plenty of excitement if he has been able to resolve the mechanical issues that have thus far prevented him from making delivering the highline excitement for which he is renowned.

The rainout certainly hasn’t dampened the enthusiasm of the Wingless Sprint fraternity, with an even stronger field to assemble this week for what will be their final outing before Christmas. Casey O’Connell, Robert Mazzer and Michael Butcher are all proven front runners whose presence this week will only serve to enhance the level of competition when they take on the likes of David Eggins, Seiton Young, Liam Atkinson, Paul Robisnon, Jacob Jolley and another 16 wingless warriors.

Gates open at 1.00pm for competitors and online ticket holders only, with general admission ticket sales and entry from 3.00pm. Early racing will hit the track from 5.00pm and the main program, which will also feature Microsprints and Ford vs Holden vs Sigma sedans, will get underway from 6.00pm.