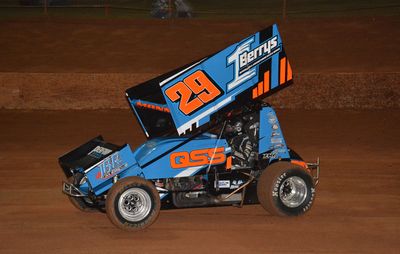 There is something on offer for everybody at Archerfield Speedway this Saturday night (May 29), with a packed program featuring the penultimate round of the East Coast Logistics Sprintcar Track Championship, a huge field of Midgets contesting the Helmet Hair Co. 50-lap Jim Holden Classic and the crazy chaos of the Caravan, Boat and Dunny Derby. The final rounds of the Shock Absorber Therapy AMCA Nationals Track Championship and the Dondex/Redcliffe Wrecking Modlite Extreme Series will also be decided, along with Compact Speedcars, Formula 500 Juniors and a fireworks extravaganza.

With only two rounds of racing remaining to finalise the results in the ECL Sprintcar Track Championship, there is really nothing left to lose for most of the 27 competitors who have nominated for competition. With series leader Lachlan McHugh, who has completely dominated the season thus far with 12 feature race wins from 16 starts, not amongst the nominations this weekend, the moment of truth has arrived for all those who have been left in his wake. Of those competing on Saturday night, only Callum Walker and Cody Maroske have been able to tame McHugh. In fact, other than Walker, who has two feature race wins, and Maroske, who has one win and is stepping into McHugh’s NQ7 for the night in a bid to protect the team’s lead in the championship standings, the only person who has offered up any resistance in recent outings has been David Murcott who, in a cameo appearance last Saturday night, finished third. In fact, such was the lack of resistance from the rest of the series regulars last weekend that Bryan Mann, in his first appearance for the season, was able to finish fifth. As a feature race winner and consistently strong performer, Mann is a welcome addition to the field, possessing a record of success that suggests he might just be the man (no pun intended) most likely to deliver something special before the season ends.

Last Saturday saw Kevin Titman and Brent Kratzmann in the mix for a while until they decided to run into each other along the back straight, actions that are not conducive to securing a good result, while defending track champion Aaron Kelly saw his challenge curtailed by a flat tyre, a rare hiccup in what has been an otherwise remarkably consistent season that sees him placed third overall in the standings. Whilst all three will be looking to bounce back this weekend, the brightest beacon of hope to emerge from the previous round was the performance of teenage rookie Jy Corbet in his charge from 15th on the grid to finish sixth, with every driver he relegated possessing infinitely more experience. Obviously time will tell, but if he is able to consistently perform at such a level, maybe Corbet looms as the driver who possesses the combination of confidence, skill and fearlessness needed to challenge the status quo.

Whilst the Sprintcar action will again be sensational, Midgets fans also have plenty to get excited about with 40 nominations having been received for the 50-lap Jim Holden Memorial feature race. In addition to the biggest line-up of locals gathered this season, a swarm of drivers from interstate and overseas are converging on Archerfield for the final Midget event of the Queensland season, which also doubles as the final round of the TFH Series. Expat Kiwi Michael Kendall has dominated the last few rounds of the TFH Series but will still be reeling from what was, by his lofty standards, a disappointing result in the Queensland Championship at Toowoomba earlier this month when he finished fifth behind a trio of New South Welshman and a fellow New Zealander.

In Toowoomba, it was Michael Stewart who prevailed in the championship final, with Kiwi gun Kaleb Currie storming home to finish in second spot ahead of former national champ Kaidon Brown and Jay Waugh. Whilst Kendall will be afforded an opportunity for revenge this weekend with all four of his Toowoomba tormentors amongst the nominations, he will be taking on the strongest field seen in Brisbane for quite some time. All up, there is a dozen drivers journeying from south of the border for the contest and also included in this group are some very well-credentialed contenders in Nathan Smee, Matt Jackson and Matt Smith. While Smee, in particular, is a long distance specialist with a very impressive record at Archerfield, if all three bring their very best form, which has carried them to a multitude of feature race successes across the country, the locals will need to lift to another level if they intend to keep the memorial trophy out of southern hands.

Of course, the likes of Darren Vine, Brock Dean, Charlie Brown and Rusty Whittaker have proven themselves capable of keeping pace with the best in the business, although Whittaker will no doubt be happy enough just to get through the meeting without enduring any more of the mechanical maladies that have rendered him a spectator for so much of the season. Of the others, Nathan Mathers performed strongly in Toowoomba to be the second local home in sixth spot, while Troy Ware has waited until the final Midget show of the season to make his first Archerfield appearance, fresh on the back of winning the Fraser Coast Cup in Maryborough. In a race that is as much about set-up and stamina as it is about outright speed, the possible permutations are endless, but the first battle will be securing a place in the main event, so we can expect the heat racing to be ferocious as drivers chase every point in their quest to be part of the feature race action.

In the AMCA National series final, Matt Hardy will be looking to end his season in style with a repeat of his previous round effort that saw him deliver his best performance of the season with an emphatic feature race win. Having been the standout performers across the full track championship schedule though with six feature race wins and 15 heat victories between them, Steve Potts and Bruce Marshall will be determined to deny Hardy in his quest for back-to-back wins, while the likes of Steve Price, Tony Blanch, Brett Robotham, Thomas Vickery and Nathan Tomkins have all finished on the podium this year without snaring a win and will be desperate to conclude their campaign in the best possible way with a visit to victory lane.

The final round of the Modlite Extreme Series will see 18 cars do battle and, following his win in the previous round, Terry Leerentveld remains the driver to beat and his rivalry with Klinton Hancey will no doubt see the duo locked in battle at the front of the field. Sean Rose was quick at the previous round and even led the opening laps of the feature race before faltering under pressure, while big performances are also expected from Callum Beerling and Kyle Honour in their fight for the championship. Beerling currently holds a 25-point advantage over Honour at the top of the series standings, with Leerentveld, Dan Lewis and Dylan Hunter next in line and all within 40 points of the championship lead, setting the scene for a frenetic finale.

Unless something drastic unfolds over the course of the night, it seems inevitable that Bodie smith and Harry Stewart will again prove the dominant forces in Compact Speedcar competition, while an even younger batch of future stars will battle in the Formula 500 Junior events.

Gates open at 1.00pm for competitors and online ticket holders only, with general admission ticket sales and entry from 3.00pm. With such a massive program of events featuring more than 130 competitors, early racing will hit the track from 4.00pm and the main program, which will also feature fireworks and conclude with the Caravan, Boat and Dunny Derby, will get underway from 5.00pm. There is no reserved seating for this event, however all patrons must maintain 1.5m social distancing.