Sprintcar showdown for Round Seven

Sprintcar showdown for Round Seven 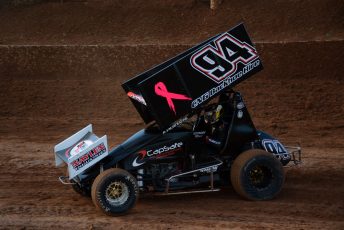 With Super Sedans and Dirt Modifieds having produced a dazzling display last weekend, Sprintcars take centre stage once again this Saturday (December 9) to contest round seven of the East Coast Logistics Track Championship, their final hit-out before the start of the international season. The impending arrival of 9-times World of Outlaws champion Donny Schatz and fellow Americans Logan Schuchart and Lucas Wolfe should have every team primed to produce peak performance this weekend, which will ensure a spectacular night of action. With Development Sprintcars, Compact Speedcars, AMCA Nationals, Formula 500 Juniors and Ford vs Holden vs Sigma sedans also on the program, race fans are again blessed with another huge night of dirt track competition at Queensland’s premier speedway venue.

Although he continues to lead the East Coast Logistics Track Championship, Luke Oldfield would, by his own admission, be much happier if he had been able to finagle a feature race victory (or two, or more) so far this season. With three runner-up finishes from the four completed rounds thus far, Oldfield has been by far the most consistent of the 40 drivers who have contested the opening rounds and he holds a 17-point lead over previous round winner Mitchell Gee in the series standings. In taking out round six, Gee joined Andrew Scheuerle and Allan Woods as feature race winners so far this season and narrowed the gap to Oldfield in the chase for the championship.

Despite failing to finish the previous round following contact with the wall that seemed innocuous but ultimately forced him to the infield, Andrew Scheuerle still sits third overall in the standings but has slipped more than 30 points adrift of Gee and finds himself under threat from Peter Lack, who is just 13 points further back. A mere four points behind Lack is Brent Kratzmann, with Ben Hilder sixth overall ahead of Callum Walker, who has already featured on the podium this season. Rounding out the top ten heading into the weekend are David Whell, Mark Pholi and Brad Ayers, all of whom are amongst the nominations. Woods will also be chasing another feature win, while the inclusion of former track championship winner Bryan Mann certainly adds an extra level of competition for the series protagonists. Throw in the likes of Mick Sauer and Sydney’s Michael Saller and the scene is set for a fabulous night of Sprintcar action.

Chasing his third feature race win in as many weeks, former national champ Matt Hardy headline the AMCA Nationals entry list for round three of their Shock Absorber Therapy Track Championship. After taking out the previous round two weeks ago, Hardy followed up with a feature win in Toowoomba last weekend and will face off against a strong field of challengers that includes Steve Price, Nathan Durston, Russ Hardy, Michael Mason and defending series champion Steve Potts.

The return of Robbie Stewart to Compact Speedcar competition boosts an already strong field that includes Dave Collins, Trent Usher and Tim Farrell, all of whom have scored feature race wins this season. However, with Stewart having triumphed in Lismore last weekend, he will be determined to replicate that result on home soil but will also have to contend witth the likes of Wayne Corbett, Steve Swingler and Matt O’Neill, who has been sensational in recent outings without any luck.

The value of the Formula 500 Junior program is evident in the success of those who have made the transition into the open ranks and the current batch of youngsters will again showcase their talents on Saturday night, with the trusty Ford vs Holden vs Sigma sedans rounding out yet another huge night of dirt track action program.

Of course, the annual kids pushbike races will also feature on the program, with gates opening at 4.00pm and early from 5.00pm. Sprintcar time trials are scheduled for 5.30pm and the main program will get underway at 6.00pm.