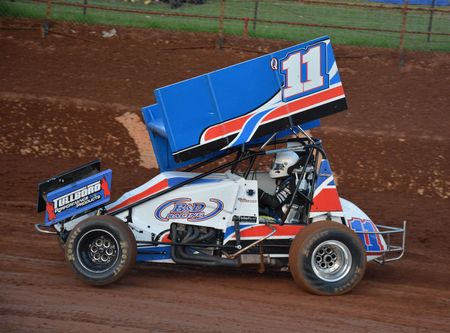 Less than a week after the successful staging of the Australian Sprintcar Championship, another massive night of racing is scheduled for Archerfield Speedway this Saturday night (May 7) with round 14 of the East Coast Logistics Sprintcar Track Championship AND the GP53 Super Sedan Memorial on the program. In the wake of a national title campaign that saw lady luck deny him a place on the podium, Luke Oldfield has no time to dwell on the disappointment of what transpired last weekend as he returns his focus to wrapping up the ECL Track Championship, while the GP53 has attracted drivers form every Australian state for what has quickly become one of the most prestigious races on the Super Sedan calendar.

Last weekend certainly confirmed that Oldfield, and many other locals for that matter, are more than able to match it with the best drivers from across the country and the reason for this is the standard of competition at each and every round of the ECL series. There is no tougher track championship in Australia and the intensity of the racing demands the teams must operate at peak performance – both on and off the track – at every round if they expect to enjoy any sustained success. Whilst Oldfield has clearly been the benchmark so far this season and sits nearly 200 points clear at the top of the championship standings, the emergence of young guns such as Ryan Newton and Jy Corbet as genuine threats every week is testament to the value of the series as a breeding ground for Sprintcar talent. On track for a top-six finish in the Australian Championship final, Aaron Kelly was another who found himself out of luck on Sunday night and the former ECL track champion currently sits second in the standings and must now be focussed on securing the best possible result at each of the remaining rounds to put himself out of reach from Brent Kratzmann, Adam Butler, Corbet, Newton and Tim Farrell, all of whom are less than 100 points adrift and are amongst the nominations for Saturday night. Although not in championship contention, Kevin Titman has been terrific in recent outings with consecutive podium results that suggest a visit to victory lane might not be too far away.

In seasons past, Bryan Mann and Randy Morgan have, more often than not, featured near the front of the field come feature race time, but neither has really been able to replicate that kind of speed on a consistent basis this season and, with the Queensland Championship just two weeks away, this will be their final chance to rediscover the kind of form that might install them amongst the favourites for the title. Having mastered myriad race categories in his speedway career thus far, North Queensland’s Brodie Boss returns for another shot at the ultimate challenge, with NSW’s Luke Thomas also amongst the entries. Having endured a frustrating national title campaign, Thomas will be looking to put the disappointment behind him with a better showing this weekend.

Having dominated the Petzyo Development Series so far this season, Dan Moes has made the step up into the open ranks this weekend. Of course, drivers developing their skills to a level that enables a successful transition to the ECL Championship is exactly why the series was created in the first place and this weekend might serve to identify who will be the next to make such a move.

Whilst the Sprintcar line-up is as strong as ever, the Super Sedan field that has committed to contest the GP53 is star-studded gathering of the best drivers from across Australia and it is hardly surprising to see so many competitors have thrown their support such GP53, an event staged in memory of Graham Pascoe, the father of four-time and current national champion Matt Pascoe. In fact, no less than four Pascoe’s will hit the track on Saturday, along with another 30 drivers representing every Australian state. In addition to securing his third Australian Championship win in January, Matt Pascoe has been an absolute force anytime he has hit the track this season, collecting feature race wins aplenty around the country, including state championship successes in Tasmania and South Australia, along with victory in the first ever Super Sedan event staged at the new Eastern Creek Speedway in Sydney.
Despite being on home soil and the fact that he absolutely blitzed the field in the corresponding event last season, the challenge for Pascoe this weekend is considerable, with four previous Australian Championship winners in the field.

With 10 national title victories between them, Callum Harper, Darren Kane, Steve Jordan and Michael Nicola are, as their records suggest, amongst the very best in the Super Sedan business, but the reality is that, no matter what happens on Saturday night, at least one of them is guaranteed to miss a place on the podium and, given the quality of the field, there is a very real chance that they could all miss out. Joining Harper in representing Tasmania will be David Nichols and Steve Latham, the latter having recently won the New South Wales Championship in Goulburn, while Victoria will have Nicola and Ash Bergmeier in the field. After an extended absence from competition, South Australia’s Dave Gartner makes a welcome return to Brisbane, although it is current Western Australian champ Gary Higgs who is making the longest haul to take part, and snaring a significant share of the $20 000+ prizemoney on offer will certainly make his return journey somewhat more bearable. It is hardly surprising that the largest interstate contingent comes from New South Wales, with Zac Brims, Hayden Brims, Darren Anning and Tyson Moon amongst the entries. Add the likes of local guns such as Sean Black, Trent Wilson, Mitchell Gee, a rotary-propelled Wayne Randall and a couple of Pascoe progeny in Zac and Brad into the mix and the potential podium permutations are plentiful. This race is a big deal for the Super Sedan fraternity and sedan fans will no doubt be out in force to see the very best in the business in action.

At the end of what has been a very hectic period for them, Formula 500 numbers are understandably down a little as Liam Williams chases his fifth Archerfield feature race win for the season. Brock Thornton took the challenge to Williams last Saturday night and forced the four-time national champ to work harder than he might have anticipated before securing the win. Tom Partington and Kurt Wilson, both of whom are also feature winners this season, are again likely to figure prominently, with Brady Argles also hoping to repeat, or improve upon, his podium result from last weekend.

Gates open at 3.00pm for online ticketholders, with general admission ticket sales from 4.00pm. Early racing commences at 4.30pm and the main program, which will also feature Compact Speedcars, gets underway from 6.00pm.