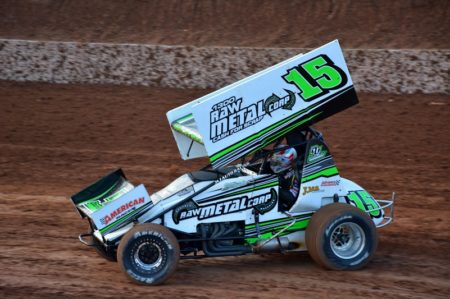 Just 48 hours after their feature race battle on Boxing Night, World of Outlaws legend Donny Schatz and local favourite Luke Oldfield will face off again at Ausdeck Archerfield Speedway on Saturday evening (December 28) in round eight of the East Coast Logistics Sprintcar Track Championship. On Thursday night, Oldfield topped qualifying, started from pole position and led the first half of the 35-lap feature race, but it was the experience and sublime skills of Schatz that ultimately prevailed come the fall of the chequer. Andrew Scheuerle finished third on that occasion and leads a field of 22 others on a mission to prevent the pair from dominating once again.

Also on a massive program will be the final round of the Super Sedan Summer Slam and a huge field of Wingless Sprints, plus Lightning Sprints and RSA Sedans, with more than 100 competitors set to hit the track for the final meeting over the year.

In addition to Schatz, Oldfield and Scheuerle, other standouts from Thursday night’s hostilities backing up on Saturday include Callum Walker, Brent Kratzmann, Cody Maroske, Keviin Titman, Tim Farrell, Bryan Mann and Kristy Bonsey, all of whom finished inside the top ten in the feature race. Fresh from scoring back-to-back Midget feature race wins, Brock Dean joins the field and brings some pretty strong Sprintcar form into the mix as well, having finished on the podium in his last start. Adam Butler is another whose presence only serves to strengthen the field further, while both Mark Pholi and Kevin Britten will be hoping for a better run of luck to ensure they avoid a repeat of the misfortunes that befell them on Thursday night.

In excess of 20 Super Sedans are expected to contest the Summer Slam finale, with drivers from as far afield as Western Australia amongst the nominations. Whilst Matt Pascoe and Darren Kane are once again expected to be at the forefront of the results, there are plenty of potential spoilers in the pack who will be primed to make their mark. Wayne Randall brings a wealth of experience into the contest, as does WA veteran Gary Higgs, whose Queensland campaign has produced some strong results thus far. Sean Black and Matt Williams are proven feature race winners who are well established as genuine contenders whenever they hit the track, while Daryl Moon (NSW) and Phil Barton (WA) loom as potential spoilers who would love to upstage the locals.

Wingless Sprints will be out in even bigger numbers with 30 competitors having nominated for the night in a continuation of the big fields that they have delivered this season that have been the catalyst for some great racing. A strong contingent from south of the border that includes the likes of Michael Butcher, Dave Eggins, Jamie Usher and Kevin Willis will face off against local aces such as Paul Robinson, Casey O’Connell, Tim Harris and Michael Lampard in a battle for bragging rights.

Dave Fanning will be the man to best in the Lightning Sprint ranks, although he will face some tough competition in the form of Wayne Iacono, Tyler Stralow, Sean Iacono, Keith Blatch and Jason Rae.

Gates open at 4.00pm (3.30pm for online ticketholders), with early racing from 5.00pm. Sprintcar time trial qualifying is scheduled for 5.30pm and the main program, which will also feature RSA Sedans, will get underway from 6.00pm