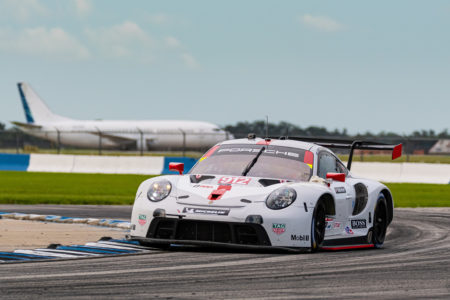 Porsche continues its streak of podium results at round three of the IMSA WeatherTech SportsCar Championship. Factory drivers Laurens Vanthoor from Belgium and New Zealander Earl Bamber achieved third place with the No. 912 Porsche 911 RSR at the Sebring International Raceway. The No. 911 sister car driven by Britain’s Nick Tandy and Frenchman Frédéric Makowiecki took the flag in the fiercely-contested GTLM class in sixth place. Porsche has advanced up the manufacturers’ rankings to second place.

Vanthoor made a catapult start to the race over two hours and 40 minutes: Starting from fourth on the grid, the defending champion of the North American sports car series swept into the GTLM-class lead after just half a lap. The Belgian defended his top spot until the first pit stop. Unluckily, while exiting the pit lane, both Porsche 911 RSR collided.

A total of four cars were involved in the incident. Tandy in the No. 911 vehicle suddenly had to dodge two Corvettes, Vanthoor made contact with the sister car, which resulted in the front apron tearing off. Two repair stops and a drive-through penalty cost the No. 912 car around 20 seconds. The No. 911 racer lost one lap due to a puncture. Thanks to a perfect strategy, daring overtaking manoeuvres and the fastest stints of all GTLM vehicles, Bamber and Vanthoor ultimately reached the podium. For Tandy and Makowiecki, more than sixth place was not possible.

In the GTD class for vehicles complying with the FIA GT3 regulations, the entry fielded by the Wright Motorsports customer squad was also hampered by an incident. At first, the American Ryan Hardwick battled his way up the order from fourth place at the wheel of the Porsche 911 GT3 R, only to crash into the concrete barriers. After extensive repairs to the rear of the 500+hp customer sports car from Weissach, there was little that works driver Patrick Long (USA) could do. The No. 16 vehicle crossed the finish line in ninth place.
Advancing to second in the manufacturer’s classification, Porsche sits just four points off the lead. The reigning driver champions Bamber and Vanthoor now rank second as they head to round four at Road America on 2 August, with their brand colleagues Makowiecki and Tandy on fourth.

Comments on the race
Steffen Höllwarth (Head of Operations IMSA Championship): “It’s a disappointing result. Our race pace was very good, but unfortunately, several things went awry in the pit lane incident. In such situations, it’s about tenths of seconds and positions. While pulling out of the pits, three vehicles made contact, and unfortunately two of them were ours. It was our fault. We’ll analyse it and make sure it doesn’t happen again. But ultimately, at least one car finished on the podium. These points were very important for the championship.”

Nick Tandy (Porsche 911 RSR #911): “Porsche deserved a better result today. Our car was definitely capable of winning. Sometimes things happen in motor racing that aren’t perfect. We have to learn from it and make sure it doesn’t happen again. We lost a lot of points today, but we’ll regard our strong pace as a very positive sign and take it with us to the upcoming race at Road America.”

Frédéric Makowiecki (Porsche 911 RSR #911): “I was part of the top group after the start and was looking good in the race. After just 15 laps we decided to change drivers under yellow. I can’t explain what happened in the pit lane, but the incident obviously cost us a lot of points. Judging by how fast Nick was later on, it’s clear that we could’ve gone for victory had the incident not happened. Unfortunately, we can no longer change that.”

Earl Bamber (Porsche 911 RSR #912): “It was a tough day and it shouldn’t have been. Our two cars were very strong, but unfortunately, the pit incident cost us a lot of time. Laurens drove very strong stints and our strategy was optimal. That’s how we managed to mitigate the damages as much as possible. Today’s race could have thrown a spanner in the works in terms of the championship, but thanks to this podium result, we’re still looking good. We’ll now take this positive aspect to the next round at Road Atlanta.”

Laurens Vanthoor (Porsche 911 RSR #912): “What a shame that this mistake in the pit lane prevented us from achieving a better result. I haven’t yet been able to explain precisely how this incident happened. Communication was definitely not perfect. Still, we fought our way up to third place and that yielded us vital points. I hope that our mistake quota has been fulfilled and we’re spared such things as the season continues.”