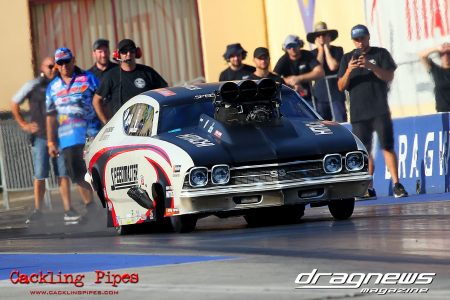 Emilio and Adamo Spinozzi got the ‘five second monkey’ off their backs at Sydney Dragway on Saturday, running a personal best 5.99 second pass in the Speedmaster Chevelle Pro Slammer.

Emilio and the Speedmaster team broke through for the confidence building moment in the second round of competition at the Santo’s Summer Thunder event, which was the fourth stop for the 400 Thunder Pro Slammer Championship season.

“We’ve made many incremental improvements with this car and finally those added up for a 5.996 second run,” Spinozzi said. “We still have a long way to go with the development but that was an important morale boost for the team.

“What was special was the other teams congratulating us on running the number. There was genuine happiness for our success which was really nice.”

While Spinozzi clocked his quickest numbers yet, win lights proved elusive on a day that saw performances step up from Pro Slammer teams across the board.

Spinozzi’s 6.12 pass in round one couldn’t get by a 5.70 from opponent Steven Ham, while event winner Sam Fenech had a 5.65 opposite the Speedmaster Chevelle’s 5.99 in round two.

Round three saw a turn around with Spinozzi able to muster a messy win over Michelle Davies where both drivers had traction issues early in their runs.

“We were happy to bring home at least the one win, that will keep us very close with Ben Bray in the points battle,” Spinozzi said.

Speedmaster crew chief Michael Marriott said it was a clean weekend in the pits, with only routine maintenance taking place on the 3000 horsepower Hemi.

“The overall picture is just starting to come together,” he said. “Suspension, clutch, engine – it all needs to balance. For us to go into a competitive class like Pro Slammer being so green to everything involved with these cars, I am very proud of the crew for how they have handled the challenge.”

The event saw a wild end when Fenech had a parachute issue in the final round and crashed in the braking area. It was the second event in a row where a leading contender had their car written off.

“We were down the top end when Sam had his accident and we all held our breath,” Spinozzi said. “We were so relieved when he walked away and amazed that he was virtually unhurt. Cars can be rebuilt but people can’t – we know Sam and the Lloyds Classis Car Auctions team will be back soon better than ever.”

The next round of the 400 Thunder Pro Slammer Championship takes place at Willowbank Raceway in April.