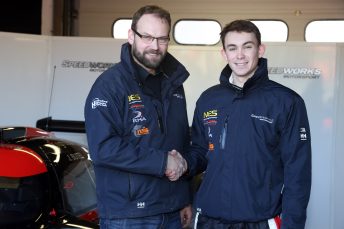 Having firmly established its race-winning credentials in the fiercely-disputed Dunlop MSA British Touring Car Championship (BTCC) and pan-European FIA International 24H Series, the Northwich, Cheshire-based outfit has expanded its stable this year to tackle the LMP3 Cup Championship with the potent, 420bhp Ligier JS P3 – adopting a similarly focussed approach as it readies its assault on the first rung of the Le Mans Prototype (LMP) ladder.

The rebranded endurance racing series will travel the length-and-breadth of Britain over the coming months, stopping off at iconic circuits including Silverstone, Brands Hatch and Donington Park – not to mention an eagerly-anticipated overseas visit to Belgium’s famous Spa-Francorchamps Formula 1 track.

As a sizeable incentive, the overall Drivers’ Champion in the LMP3 Cup Championship – renamed after receiving official endorsement from the ACO, the organising body behind the legendary Le Mans 24 Hours – will be awarded complimentary entry into the 2018 Michelin Le Mans Cup, worth more than €45,000.

Butel has spent the past couple of campaigns learning the ropes in the F4 British Championship on the BTCC support bill, recording seven top ten finishes along the way and battling for victory at Thruxton – the fastest and most fearsome circuit in the country. His performances brought the 20-year-old Jerseyman to the attention of Speedworks Team Principal Christian Dick, who is eager to see what his new protégé can achieve as he makes the transition from single-seaters to sportscars.

“We are delighted to have Jack on-board for our first season with the Ligier JS P3,” he enthused. “This is the beginning of an exciting new adventure for us, and to have recruited such a promising up-and-coming young talent as our first signing is great news.

“We have kept a close eye on Jack over the past two years as he has cut his teeth on the TOCA support package in the F4 British Championship, and in what is commonly regarded as the UK’s toughest junior single-seater series, he has demonstrated consistent progression and genuine potential.

“We are confident we can continue to help Jack to fulfil his ability in the LMP3 Cup Championship, and we look forward to announcing further drivers in due course.”

Butel is set to contest all six rounds on the 2017 LMP3 Cup Championship calendar, and having initially tried out the five-litre Ligier JS P3 at Snetterton last year, the St. Saviour native is keen to renew acquaintance with his new mount as testing begins in earnest.

“I am so excited to be joining Speedworks’ LMP3 team for the year ahead,” he acknowledged. “There were a few options on the table for 2017, but the deal to race with a team like Speedworks was too good an opportunity to pass up. I have always wanted to go down the sportscar racing route and when Christian and I discussed the possibility, we found we shared a similar passion for the car and series.

“The Liger JS P3 is a real weapon. I am used to downforce from single-seaters, but the capabilities of the Ligier are unreal. For quite a big car, you can push it really hard as the faster you go, the more aerodynamic grip you have. The power delivery is phenomenal and will be quite spectacular to watch when these things go wheel-to-wheel.

“I cannot wait to get going and to work with Speedworks in the build-up to the first round. The UK series looks very competitive, and I’m looking forward to hopefully mixing it and challenging near to the sharp end of the grid.”