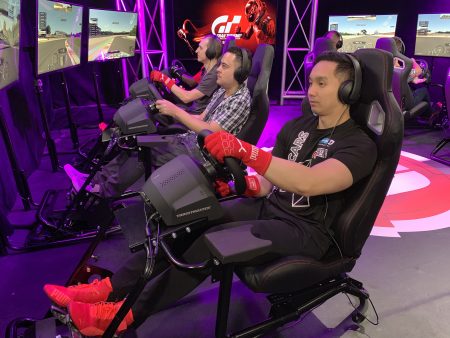 A selection of Australia’s best Gran Turismo™ Sport gamers, on PlayStation®4 (PS4™), are once again set to go head-to-head against Australia’s finest professional race drivers in the ultimate battle for eSport supremacy within the sim racing genre.

Following a successful inaugural season last year, Speedweek eSeries powered by Gran Turismo Sport and PlayStation 4 is back for 2019. The series was the first of its kind to be broadcast on Australian commercial television, through the hugely popular Speedweek on SBS. The series increased the exposure of sim racing to the mainstream public and got people talking about the competitive nature of the sport itself.

For season two, the battle of Pro Gamer against Pro Driver continues. Four of Australia’s best Gran Turismo sim racing gamers have been selected to go into battle against four Pro Drivers, whose talents feature a wide diversity of categories.

They will race against each other over four rounds on Gran Turismo Sport, which boast an online community of over 7.5 million people worldwide. All drivers will be racing in GT3 specification machinery with a Balance of Performance applied to ensure an even level of competitiveness across the board.

The Series kicks off at the Red Bull Ring in Austria, before heading to the Circuit de Barcelona-Catalunya in Spain, followed by the Autodromo de Interlagos in Brazil and finishing off with a split round, featuring the Autodromo Nazionale Monza in Italy and Mount Panorama, Bathurst.

“We were really thrilled by the feedback we gotfrom the the first season last year,” Swaab said. “So we are excited to be producing season two of Speedweek eSeries, as we see sim racing becoming an integral part of motor racing worldwide. ”

“We’ve seen how sim racing has grown in popularity over the last few years and how it’s become more mainstream,” Swaab added. “From Formula 1 through to MotoGP, they’re all embracing and running official eSports championships.

“The Gran Turismo Sport Gamers and Pro Drivers have a common passion and that’s to go racing. The GT Gamers use sim racing as an avenue to professional motor racing, without the huge financial outlay that’s required in real life. The Pro Drivers, on the other hand, use sim racing as a vital tool to get themselves up to speed on circuits they’ve never raced on before, whilst keeping their skills fresh. As we saw last year in the first series, the competition between the Gran Turismo Sport gamers and Pro Drivers was very close, so we are hoping for that again in season two.”