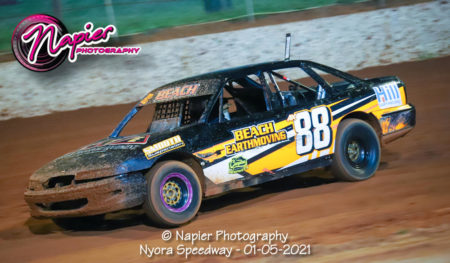 After the recent Covid lockdown delayed the annual Alexandra 100 Lap Derby weekend, dirt track fans from right around Victoria are currently snapping up the highly sought after limited number of tickets available through online ticketing sources.

The biggest event each season at Alexandra Speedway is set to run this weekend under Covid approved attendance numbers. Entrants in the 100 Lap Derby, the biggest annual Speedway event in Australia, the Bathurst of Speedway events, are at eighty plus drivers, with support classes also attracting around forty cars each.

Tickets are currently available for interested spectators via the following link on the internet. Once the capacity limit is reached, no tickets will be available https://www.alexandraspeedway.org.au/covid

The Open Sedan competitors in the 100 Lap Derby include northern suburbs racer Lennie Bonnici the current race champion in an event he has won four times in succession. Bonnici will compete against some brilliant proponents of short circuit dirt racing that involves competing through a dogleg. Local Alexandra man Luke Fallon another four-time winner of the event is the biggest name on the list as far as challengers are concerned and once again Tony Moule has entered and is the only other former winner of the event having won it once.

Other competitors that have a habit of winning in other classes during the season that are in the field include Damien Miller who is a gun in Sports Sedans, Warrick Taylor from the Unlimited Sedan class whose won the last three Victorian titles in succession, Matt Nelson the current back to back Street Stock state champion of Queensland, Josh Service, Lee Beach and Dale Smith all Alexandra members who rack up wins in Sports Sedans all season plus Mildura racer Jake Drewett the current Modified Sedan Victorian champion.

Drivers have been finishing closer to Bonnici in the last two instalments of the Derby, has Bonnici got a new trick in his bag to win five in a row, or will we have a new winner after his dominance?

The Standard Saloon feature event has the biggest entry list the class has had in some time. Many of Victoria’s best have entered including Shane Stewart the Victorian champion and his brother Daniel Stewart the current number three driver both from the Latrobe Valley.

The racing should be bumper to bumper race after race and terrific entertainment for race fans backing up the Derby.
The final class for the weekend is the Junior Sedan Victorian Short Circuit Championship. Entries in the class also are the largest in a long time with some interstate flavour also this year.

Jaxson Vella, Dylan Barrow, Linken Paterson, Jayden Bryant, James Oliver and Rhys Meakins are some of the entrants that have been at the front of fields or winning races through the season that are entered, and a winner is expected to come from this group of drivers.

However, add in Lachlan Robins the Tasmanian champion who has the potential to mix it with Victoria’s best plus Kiara McKercher also from Tasmania and from Queensland the Santin’s Sophie and Jaiden, their disadvantage though, is never having done a short circuit dirt track event.

For Saturday racing the action starts from 1pm, gates are open from 8am and Sunday racing begins at 10am.

For a complete weekend pass the entry prices are $50 for an adult, $30 for a child aged 10 to 16 years old and for aged and invalid pensioners. A family ticket can be brought for $130 for two adults and three children aged 10 to 16 for the whole weekend and all children under 10 years of age are free.

For spectators that only wish to attend the Sunday, prices are $25 for adults, $15 for children aged 10 years to 16 and aged and invalid pensioners and $60 for the family ticket with all children under 10 free.