Speedway is back at Nyora Raceway this Saturday night

Speedway is back at Nyora Raceway this Saturday night 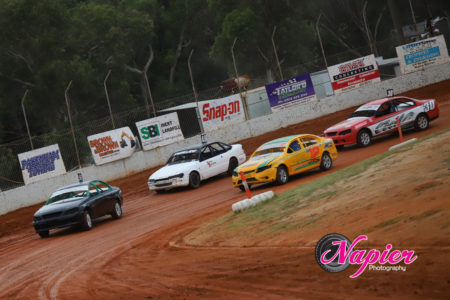 Dirt track Motorsport fans from Melbourne’s South East and Gippsland are excited that for the first time since March, a full race meeting is about to happen, and the grassy bank of the Nyora Reserve spectator area is sure to be packed for the action beginning at 5pm Saturday evening.

With a Junior Standard Saloon feature event, a special visit from Santa and opportunities for prizes to be won with raffles and give-aways, the crowd will be kept involved and the superstars of the future will entertain.

Junior Standard Saloon competition should be impressive with the likes of Blake Smith, the Cecil brothers Owen and Harry, Nathan, and Maddison Miles, Matty Shankland, Chloe Coomer and Rhys Meakins in the line-up. Meakins is a standout driver in the class, however each season drivers step up and come out with extra impressive skills behind the wheel. Local hopes will be on the Cecil’s, Miles or Shankland to win.

Open Standard Saloon racing has around thirty competitors, the action should be intense with no shortage of race drivers with the ability to win. Some drivers know Nyora’s tight track like the back of their hand and can be fully expected to be in the thick of the action, Daniel Stewart, Mark Miles, Hanna Domburg, Brendon Miles, Justin Hutchins, Stephen Douglas, Trish Dike, Rhys Lansdown, John Dike and Mick Coomer are just some of the hard chargers in the field. Expect Stewart and Miles to be door handle to door handle in the feature event.

Conder was the winner of the Sports Sedan Masters last season, the last major event before Covid set in. Ardley has a new race car as does Reddecliffe, Service was a gun at Alexandra over the last two seasons. There is some real talent to watch in this one.

Nyora is a family club, and the Ladies get a run in the Ladies Standard Saloons with back-to-back Victorian Champion Trish Dike the benchmark in this field, whilst she and Hanna Domburg will be racing more than anybody else on race night competing in two classes, this might give Sara Benson extra opportunity as she seeks victory. Sarah Meakins and her daughter Courtney Meakins are two more outstanding chances for victory with several other Ladies that are quick at the wheel.

Unlimited Sedan action includes another Victorian Champion, Warrick Taylor. The back-to-back class champion is sure to be under pressure from Peter Cox, Freddy Ramsdale, Daryl Nicolson, and Daniel Unternahrer. This class are big wheels, big chassis and eight- or six-cylinder engines with competitors seeking a power to weight combination. Taylor is favourite pre-event; endurance racing teammate Cox wants to put him behind him in the feature event.

The Speedway Sedan Australia or 1500cc Junior Sedans to make it easier for fans to picture, is broken into two groups with the experienced Top Stars and the developing New Star grades. In Top Star action this week’s Horsham podium line-up of Linken Paterson, Rhys Meakins and Luke Cornfoot in the field. Those three with Dylan Barrow, Jayden Bryant, and Nyora girls Kiarna and Tenayah Barton are some of the drivers to watch closely. It is hard to look past the Paterson & Meakins though.

In the New Stars Jack Randell looked impressive last season in the few runs he had, and Tamika Simpson showed strong development through the year. However, lots of Nyora member drivers could pick up a win here. Rowdy Andreatta, Riley Taylor and Brody Barton just some of those youngsters.

NOMINATIONS LIST FOR DECEMBER 12TH RACE MEETING ARE AS FOLLOWS