Speedway is back at Darlington this Saturday afternoon

Speedway is back at Darlington this Saturday afternoon 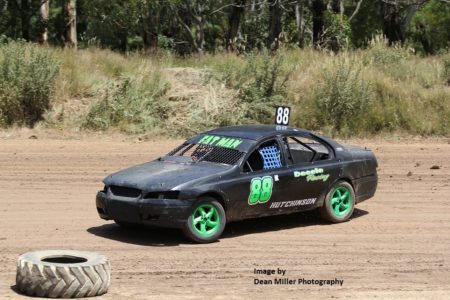 This Saturday afternoon the Mortlake Speedway Club is delighted to be able to bring dirt flinging, wall crunching, door to door Speedway action from it’s Mid-Western Speedway complex in Darlington. A tremendous line-up of Standard Saloon competitors from Ballarat and across the South West Victoria region have signed up to compete for the ‘Mortlake 500’ with supports from Sports Sedans, Junior 1200cc Sedans, Mini Sprints and Street Stocks and the local committee could not be happier to be back underway.

With some testing times for the world slowly passing us by, the Mortlake club committee have worked hard on maintenance at the facility and building up business support to bring motorsport entertainment back to Darlington, beginning with the feature event for Standard Saloons feature.

Club President Paul Singleton explains the re-launch of racing at Mid-Western. “Our committee is working hard to establish interest in racing at our venue, interest from the community and the business in surrounding towns and build upon our membership base. We have lots of exciting communications coming out over the coming months to build into next season, however right now we have so many people who have messaged us to say they would love to go racing at Mortlake again, so here we are.”

Explaining this weekends events Paul added. “We were originally scheduled for another date and due to circumstances beyond our control we had to move that. The availability of classes has affected us; however, we are incredibly pleased with the support from the Standard Saloon community, and we plan on looking after them this weekend and beyond. We are going to build up interest in Sports Sedans into next season, we are excited by the Junior 1200 Sedans who are looking to race at Mid-Western whenever we can schedule them, and we also are thankful that at short notice the Mini Sprints are sending some competitors before they come back for a points round later this season.”

The Mortlake 500 event will be chased by the Standard Saloons. With prizemoney and prizes on offer almost twenty cars have entered. Stand-out competitors include Tim Hutchinson from the nearby Belmont Speedway Club who has won more than once already this season, Nathan Hutchins, Brent Clark, Nicole Vaughan and Hanna Domburg from the Portland Club, and a host of others from Ballarat along with Mortlake club member James Pederson.

Sports Sedan action includes Dean Pederson from Mortlake, Ian Bartlett and Pauly Botheras from Daylesford, Jasmin Molloy and Daniel Brittain with the hope’s others will put their hands up to join in over the next couple of days.

In Junior 1200cc Sedans Arthur Hutchinson from the Daylesford club leads nominations from Jemma Woods, Riley Taylor, Bryce Leek and Brock Stephenson. The 1200s is a brand-new class spawn from the national Junior Sedan class where 1500cc cars rules the roost. It is hoped in the coming months that several Datsun’s and Corolla’s in sheds and paddocks in the South West hit the track with the others, with support from Mortlake Speedway Club.

Mini Sprint drivers coming into town to have a skid include Jason Lynn, Ally Moore, Maureen Sell and Rahmon Rivero, whilst a couple of Street Stocks have also nominated to get some laps in.

Gates for competitors open at 11am and to the public at 1pm. Racing begins at 3pm with a 7 to 8pm finish planned. No Eftpos on facility, Cash only, No BYO Alcohol and No fires to be lit around the track. For general enquiries about the Speedway contact Paul.