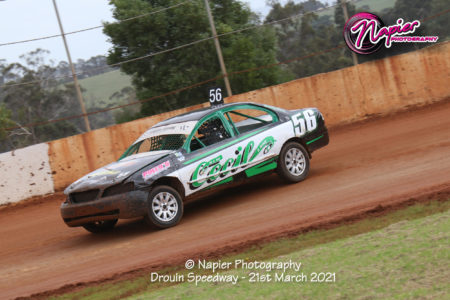 This past Sunday Drouin Speedway began its season of racing which will run into June before ending with a full season planned for the next one. A Junior Standard Saloon feature headlined the day with club class action in Standard Saloons and Ladies Standard Saloons whilst Sports Sedans and Unlimited’s combined for Open Sedan racing.

Unfortunately, before the finals could take place and after a great day of racing the rain intervened and the race meeting had to be cancelled after all the heats had been completed.

With support from one of the club’s member families the Otimi’s, The ‘Melbourne IT Support’ Junior Jam feature included prizes for every child that was entered with bigger prizes for those that did well. Six qualifying races shared wins between Linken Paterson, Harry Cecil, Nathan Miles, Jack Yeoman’s, Maddison Miles, and Yeoman’s a second time.

With no final run the top qualifiers in order were Cecil, Yeoman’s, Nathan Miles, Paterson, and Maddison Miles. Further information on the running of the event will be available in coming days via the Drouin Speedway Club social media pages.

Sharlene Laidlaw, Kate Stuchbery and Jemima Borkowski all won races in the Ladies Standard Saloon heats and after points calculations Laidlaw won the day in front of Stuchbery and Borkowski.

Standard Saloon Open racing produced a new star of the class with debut race driver Matt Leek who had never raced a Speedway car prior won two of his three heat races and was given another victory after a driver disqualification due to technical infringement topped the day on points. Leigh Gooding twice, Tegan Bullard, Jeff Blencowe twice and Andrew Cormack were other winners. Without the feature race being run, Leek can consider himself the victor on the day from Gooding, Blencowe, Bullard and Darwyn Lee.

In the Open Sedans after combining Sports Sedans with Unlimited Sedans due to lack of individual class nominations Stan Brown in his Unlimited, Legend of the sport Ray Gould in his Cortina and Anthony Knight in his Falcon took heat race wins. Knight was also the fastest car on track all day out of any driver with an 18.903 lap time in the final heat. On points Knight can say he won the day from Travis Ramsdale in an Unlimited with Brown, Gould and Ian Page rounding out the top five.

April 11th is the next club show with Crash and Bash ‘War on Wheels’ and all Standard Saloon club classes.