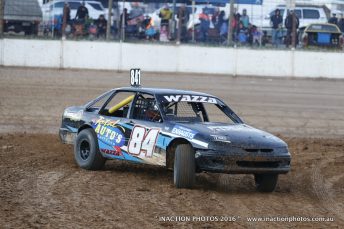 The annual Alexandra Speedway 3 Hour Enduro event livens up the Speedway world this Saturday night with forty teams to compete for the title of Enduro Champions, with any number of combinations a great chance of taking the win if they can stay out of trouble and keep turning circles.

The event continues to grow in popularity with competitors from various speedway categories over the last few years having made purchases of cars just to use in the 100 Lap Derby and the 3 Hour Enduro and this year we add to them Colin Peadon from New South Wales and Wayne Laverty from Queensland looking to go the distance.

Who can forget the finish to last season’s race?

Again from the tight finish to the event in August 2016 the combination of defending champions and Eastern Suburbs lads Lenny Bates and Andrew Jordan will be in the thick of the action, as will Pakenham area Brothers Damien and Brendan Miller, all four racers are Alexandra club members and popular with the fans.

Another strong Alexandra combination is Steve Kershaw and Matt Stampfli, both competitors have had wins and top three finishes a plenty during the regular season and hope to gel to be at the finish with a chance to win the big show, Matt Nelson and Cameron Dike are potential an exciting combination with Nelson a multiple state champion a number of times and Dike a crowd pleasing racer who loves to go around the high line, Josh Service and Daniel Unternahrer who is a former event winner form a team and Brad Warren who this season again finished second in the 100 Lap Derby for the second year running has formed a team with Alexandra local resident and four time champion in the 100 Lap Derby Luke Fallon, they will be very hard to beat.

You could add to the potential list of winners twenty other teams with strong competitors with partners just need a little more luck than others or a little more speed and consistency, they might pull up an upset, however we have seen that the winning team will come from a combination banging out 33 to 35 second laps each and every lap.

Bonnici will be hoping he can do enough laps to keep him and his team mate in the top then and be there when it counts at the end, Zac Swanson, Corey Lincoln, Tim McPherson, David Barrie are in similar positions, break downs, cautions, flat tyres all play their part and if you’re on the lead lap when stoppages occur, anything can happen.

Teamwork is a massive part of winning here with crews forming signals with drivers so that they know when to prepare the second driver to hit the track and crews required to prepare the car that has just left the track to go again just in case something happens to the other racer.

Along with the speed required to win, there is a fair amount of luck that has to come your way to make sure of it and become the 3 Hour Enduro champions

Extra entertainment will come by way of the ‘Blackburn Trailers’ supported Tip In Competition! Tipping in normally is best in turn one as drivers enter into the dog leg section of the circuit and there is a host of drivers that believe they are the best at tipping in which is the art of going into the turn sideways, the fastest and smoothest.

Racing kicks off down Gordon Street Alexandra at 2pm on Saturday with the big 3 hour race likely to start around 6pm. Bring your family, some heating wood and a portable fire drum to enjoy the action.

For contact at the club call President Dave Cherry on 0408 212153 at reasonable hours up until 6pm race day, leave details if it the call is un-answered.

Alexandra Speedway Club is very thankful for the support provided by all these businesses: