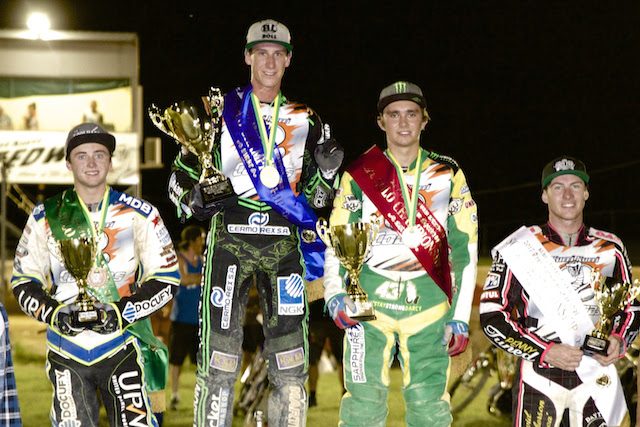 MEDIA RELEASE: The 2017 Australian Speedway Under 21 250cc Championship was a nail biting three-way battle, that went down to the wire in what was some of the most intense and closely fought racing ever seen at Kurri Kurri.

On Maximum points, the current U21’s World Champion took out the 2017 Australian Championship with a formidable win. The Under 21’s was an actioned packed Saturday night on January 28th, that saw more than half a dozen riders come unstuck, making heavy contact with the dirt.

The last heat of the night ensured crowd favourites, Max Fricke and Jack Holder both tied on maximum points with Brady Kurtz only one point behind on 11.

In a race not to be missed, a flying start off the line resulted in a crash at turn one that saw Holder go down, Kurtz flying over the top of him, in turn both falling heavily.

Both riders were up again and after a short delay, the race was re-started. Kurtz dramatically pulled out of the race due to an apparent injury from the prior stack, leaving Fricke to take the win over Holder.

The final race including Fricke, Holder, Lidsey and Pickering was worth the wait, with Fricke gaining the lead over Holder to win the night.

The battle behind the front runners was equally impressive, with Lidsey battling Pickering to take his first Australian Championship podium.

On the back of his World U21 Champion title, Max Fricke shared with Motorcycling Australia how he felt after adding the U21 Aussie title “It’s awesome to have done the double!

We are heading back overseas now and its pretty cool to be finishing our Aussie season on a high. I have built some momentum going overseas which is great! I had some tough competition tonight with Jack and I can’t remember the last time I ran at full maximum!”

A humble Fricke also seized the moment by adding; “A big shout out to everyone who is involved in running tonight, the track has been awesome all weekend.” As 2017 is Max’s last year in U21’s he confirmed that he would be back next year to contest in the Senior events.

“It was a good meet tonight and I got all the points I could get. I knew the last heat was going to be as tough as they come and that I had all the top guys in it,” Holder explained.

“Unfortunately, BK (Brady Kurtz) crashed out and you don’t like seeing a mate get hurt like that. So, I tried my best in that final and made a good start, because you can’t give Max a head start.”

When asked how he was feeling after suffering through two crashes in the night, Jack said “I had to lay the bike down to avoid a few people and the other crash that was a first corner incident. I’m all sweet! Just a bit of a graze on my finger.” The hearty young rider expressed.

Jack shared with MA: “Of course I will be taking my position up in the World U21’s which is what I came here to do, and I really wanted to defend my title, but, I was second and that is second best. So, I can’t wait until the World season starts.” 2017 is also Jack’s last year in U21’s.

Third place getter, Jaimon Lidsey has another three years left to race in Under 21 Championships and is touted to be stiff competition through those years. He shared with MA; ” With Max being the World U21 Champ and Jack winning it last year, it’s pretty cool to finish just behind them. To finish off the season with this is great.” The young gun finished.

Chris lent his thoughts on the ‘up and comer’s’ “We have a bunch of young Aussie guys who are doing really well with a lot of guys also competing over in England with good results too which is great.

Max is probably our best U21 at the moment and is our current World Champion too! So it was a good night for him to wrap up the title and for my younger brother, Jack to get second is a great effort.” He surmised.

MA simply had to ask Chris what he felt when he watched his little brother race at speed. Chris said “It’s hard to watch him (Jack Holder) race, I get more nervous watching because I am not in control.

“I am stoked he had a good night and I like to come up and give him a hand when I can. Jack lives with me overseas and he will be racing the Elite rounds this year.

“He will be a lot busier this year, so it will be good for him to get more experience and hopefully step up to the Australian Senior team.”