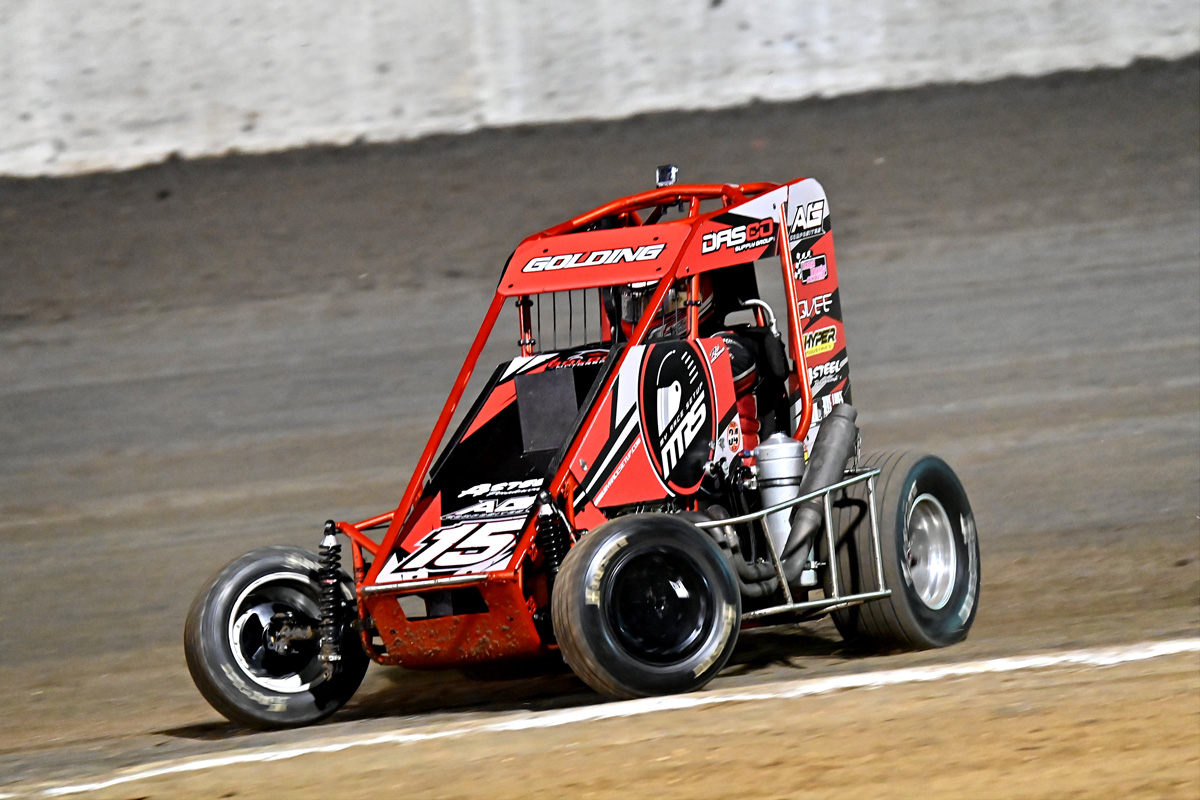 The Golding brothers will both be contenders for the WA Speedcar title this Saturday at Perth Motorplex, so long as they can turn around their luck.

Rob and Daniel Golding have each endured their fair share of knocks this season, and each is hopeful that the title event will mark a turnaround of fortunes.

Rob was not even sure if he was going to make it to the event after engine damage at the previous round.

“It was a hell of a week,” he said. “Leading up to the last event we had a water pump seal fail. Usually it’s not a big issue but the replacement was faulty, so when we put it back into the motor it leaked straight away. We had to order another one, but with freight times at the moment it was touch and go if it would arrive.

“On the night of the event was a whole other story. The motor locked up just as we went to push off after the red light. We pulled it apart, and replaced and checked as much as we could at the track, but the motor wouldn’t budge.

“It turns out that the camshaft picked up a bit of metal, which has then spun around and heated up and collected more material and would have been super hot. Once the motor stopped during the red light, the metal cooled and created a keyway on the thrust plate and stopped the cam from turning. So I’m very lucky that it happened after I had shut the motor down, because if it had stopped while turning at 8,000rpm it would have been a whole lot worse.”

After sitting as high as second in the track championship this season, Rob knows he has the form to win. He just needs the luck on his side.

“It has been a bit of a different year for us, very hit and miss. We have been trialling a few different things setup-wise, so we have a few things we can try, but it really depends on the track. Driving-wise, I need to get a bit of confidence back, but that can happen really quickly in this sport.”

Like Rob, Daniel’s pace has been frustrated by issues beyond his control.

“We had a pretty big wreck in the state title last year which was disappointing, as we had a great night up to the feature. Our car speed and feel has been great, my crew chief Liam has really worked hard in getting me comfortable with the car,” Daniel said.

“We damaged our motor a few weeks back and we’ve torn up a fair amount of gear this year being caught up in other people’s crashes, but that’s all part of it. I think we’ve had five podiums this year but the real focus is getting that first feature win. It’s close, and with some luck on our side and consistent laps there’s no reason we can’t get that win at the WA title.”

While the brothers race under a common Golding Motorsport banner, each car functions independently thanks to different driving styles.

“Our racing programs are separate now, but it’s still a pretty awesome experience to get to race alongside him,” Rob said. “I get a big thrill when I see him do well on track. If I can’t be up there then I hope it’s him. He’s always been a massive supporter of mine and without him I probably wouldn’t be out there. I think we both try that little bit harder when we see the other car on track but we always give each other lots of space.”

Daniel said he is just as proud to see his brother turning laps on the same oval.

“I don’t think there’s anyone I try harder to get past than Rob, and in the process we have touched a few times,” he said. “There’s a natural rivalry but also a huge amount of respect. I love racing against Rob and although sometimes I can’t catch him it also makes me proud he’s doing so well. But nobody likes to be beaten by their little brother!

“Each car and driver are usually quite different. What has worked for me may not have worked for Rob and vice versa. The car packages are pretty close when it comes to horsepower, and the chassis are the same. Our driving styles are probably the main difference and that’s where our setups go in their own direction.”