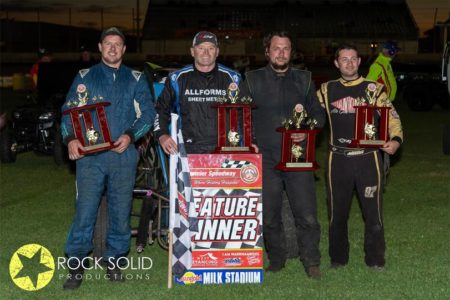 Heat one would see Dave Lambert From Sydney, NSW check out in the lead early taking maximum points with a Heat win, Robert Heard did all he could to hold off Travis Mills for second with
Squizzy holding in for a tight third place.

Andy Peace was able to put a front row start to full use picking up the win in Heat race 2, while Nathan Smee went to work on Nick Parker majority of the 10 laps just picking up second place by 0.103 on the final turn with Parker left to collect third.
There were no challengers for Nathan Smee in Heat race 3 as he won, Matt Jackson would finish in second with Mitch whiting rounding out third place.

Fourth & final Heat race got underway with some close battles, Nick Parker would go past Ramsay on the inside with 5 to run to take the lead, Ramsay locked away second & Travis Mills rounded out the podium finishes in third.
It was feature time Nathan Smee & Nick Parker would lineup on the front row for the 2022 Beasley Family Memorial.
Fans were treated to a number of battles throughout the 20 laps including Andy Pearce & Travis Mills who went wheel to wheel trading spots for a number of laps, Matt Brown would bring on the cautions with 16 still to run bunching the field back up.
On the reset it was Smee that would sail off into the distance bringing home the win while Nick Parker was rapt to be on the second place podium step in the new Baretta chassis, rounding out the top three was South Australias Robert Heard.