Spectacular wins for Oldfield and Brown

Spectacular wins for Oldfield and Brown 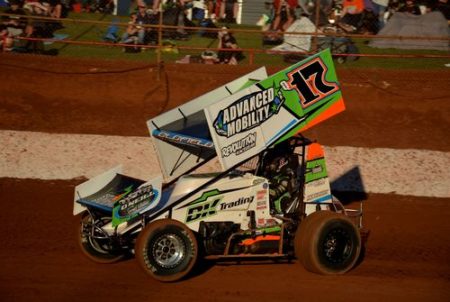 In what proved a phenomenal start to the 2021/2022 Queensland speedway season, Luke Oldfield and Charlie Brown thrilled the massive crowd at Archerfield Speedway on Saturday night (October 2) with respective feature race wins that were both thoroughly spectacular in their execution. Oldfield pounced late to chase down Lachlan McHugh and Cody Maroske to win the opening round of the East Coast Logistics Sprintcar Track Championship, while Brown was brilliant in running the high side to round up Michael Kendall and take out the opening round of the TFH Midget Series.

After a frustrating 2020/2021 campaign that saw him unable to convert his myriad podium results into feature race wins, Oldfield bounced back in the best possible way to start the season in victory lane. McHugh led through the first half of the race, only to falter whilst negotiating lapped traffic, enabling Maroske to close in and assume the front running. A series of slide jobs would see the pair swap the lead in a superb scrap, with a couple of restarts ensuring that third-placed Oldfield remained within striking distance. Soon after the final restart and with just five laps remaining, neither Maroske nor McHugh would yield in their determination to occupy the same piece of ground in turn two, allowing OIdfield to surge under both of them and assume a lead he would hold to the chequer. Bryan Mann advanced from row five to finish in fourth spot, with Kevin Britten securing his best ever Sprintcar result with a fifth-place finish in advance of Adam Butler, Tim Farrell, Ryan McNamara, Nicholas Whell and Anthony Lambert.

In the TFH Midget main, Kendall shot to the front from pole position at the drop of the green and, ordinarily in such circumstances, chasing him down would prove an exercise in futility. However, Brown executed his race plan to perfection, running the ragged edge on the highline to reel in Kendall and assume the lead on lap 10. Once in front, Brown refused to change tack and rode the cushion all the way to the chequer to score a stirring win. Kendall dropped to third momentarily behind Scott Farmer before rallying to reclaim the runner-up result, leaving Farmer third at the flag ahead of Brad Dawson and Rusty Whittaker. Rounding out the top ten were Cal Whatmore, Richard Rooke, Darren Dillon and Nathan Mathers.

A 29-car field would hit the track for Sprintcar qualifying, split into three flights with the quickest in each group securing maximum points. Clocking a best lap of 11.714 in besting his group, it was Maroske who would emerge with KRE Quick Time, edging out McHugh (11.725), Whell (11.873), Darren Jensen (11.930) and Oldfield (11.932), who still proved the best in his group despite timing fifth overall. Aaron Kelly, Brent Kratzmann, McNamara, Butler and Britten completed the top ten.

The opening heat race of the new season only made it through three laps before a spin from Ryan Newton in turn two halted proceedings. Having advanced to third after starting fifth, Oldfield triggered another restart with a spin in turn four on lap four. Randy Morgan would ultimately prevail, leading home Paul Rooks and Mark Pholi.

In heat two, it was Maroske who found himself in a spin, looping in turn three to be collected by Jy Corbet and Karl Hoffmans, neither of whom would take part in the restart. Sam Bylsma was the early leader before being bamboozled by Butler, who would go on to take the race as Bylsma fell further back to finish behind Kelly and Maroske.

Britten bested McNamara and Kratzmann in heat three before Oldfield, Maroske and McHugh shared the spoils in the final round of heats, all starting from pole position and facing little resistance. Farrell and Morgan trailed Oldfield home in heat four, with Kelly and Butler following Maroske to the line in heat five before Whell and Britten filled the minors behind McHugh in the final preliminary.

Emerging as top qualifier overall, Maroske would subsequently select the prime starting spot for the Spanloc Dash, with Kelly to share the front row. With the first four of Maroske, Kelly, Oldfield and McHugh finishing as they started, Britten was the only mover in the field, rounding up Butler, Whell and Morgan to finish fifth.

The B Main was contested with all the desperation to be expected in a last-chance showdown and it was pole starter Paul Rooks who led the early stages from Bylsma before Mitch Gowland pounced on lap seven in the wake of back-to-back restarts to grab the lead. The battle for the final transfer positions was an absolute cracker with Rooks and Newton occupying the positions initially, chased by Woods, Vardy, Lambert and the rest. The first stoppage came on lap six when Andrew Baumber tipped over in turn four and then Woods saw his feature race aspirations disappear when he spun in turn two on the next lap. While Gowland and Bylsma were untroubled in securing the top two spots, Rooks found himself unable to resist the three-pronged attack from Newton, Vardy and Lambert. Back on track after sitting out last season, Vardy surged his way into third, with Lambert snatching the final spot in the main event from Newton in a frantic final few laps. A late surge from Jy Corbet carried him to sixth ahead of Rooks, with Woods, Andrew Corbet and Karl Hoffmans rounding out the top ten.

McHugh launched from the outside front row to lead the feature race field away and had already started negotiating lapped traffic when the first restart came on lap 10 courtesy of a spin from Vardy in turn four. Back underway and McHugh led the field again with Maroske, Kelly, Oldfield and Britten next in line. When McHugh found himself in traffic again on lap 15, it was the merest of stumbles through turns three and four that allowed Maroske to pounce and sweep into the lead. From here, the two Gold Coaster young guns engaged in a series of slide jobs, with Maroske successfully countering every move by McHugh. A restart on lap 20 to enable the stricken Morgan to exit the track bunched the field but did little to quell the intensity of the scrap up front. Oldfield, meanwhile, was now third ahead of Kelly, whose race ended with six laps remaining when, having injured his knee, he slowed suddenly exiting turn four before retreating to the infield. From the final restart, Maroske and McHugh continued their scrap and, seemingly oblivious to the threat posed by Oldfield, found themselves usurped with just five laps remaining. With Oldfield charging to the chequer for a very popular win, McHugh was able to slip ahead of Maroske to secure second spot, with Mann surging from ninth to finish fourth.

The opening heat of TFH Midget action was a chaotic affair that saw both Chris Moor and Brock Dean finish upside down in separate incidents, along with spins from Kody Stothard, Darren Dillon and Kendall, who had just taken over the lead from Rob Stewart when he looped in turn four. From the ensuing restart, a blatant infringement from Cal Whatmore see him first to greet the chequer but ultimately result in his relegation to third behind Stewart and Kendall.

Thankfully, heat two was a much more sedate affair as Matt Hefford defied the best efforts of Mitchell Rooke to emerge victorious, with Brown home third.

Kendall bounced back to prevail in heat three over Dillon and Whatmore, while Hefford suffered a setback when an incident in turn four left him and Farmer on the infield.

The final heat saw Brown secure a front row berth in the main event when he downed Brad Dawson and Rusty Whittaker.

It came as no surprise when Kendall led the feature race field away from pole position, nor was it unexpected that Brown would head up-track to indulge in his customary highline heroics. A spin by Scott Doyle in turn four would regroup the field for the first time, with Kendall leading away but unable to keep Brown at bay. Brown would secure the lead on lap 10, with another interruption coming a lap later when Kody Stothard stopped in turn three. Upon resumption, Brown went straight back to the fence and, despite contacting the concrete on a couple of occasions, remained in control as Kendall found himself fending off Farmer, who had advanced from row four to slip into second with 12 laps to run. Kendall would reclaim the position on lap 15 and the order would remain unchanged through to the finish. Dawson started where he finished in fourth, while Whittaker climbed six spots to secure fifth.

Following heat wins to Liam Atkinson, Ben Manson, Shaun Knight and Steve Plikington, the OzSports Trophies and Apparel Wingless Sprint feature race was a close, but fairly straightforward affair with Atkinson leading all 20 laps to edge out Manson. The big moves came further back as Jayden O’Toole and Dan Moes surged late to fill third and fourth respectively in advance of Ian Milnes. Next best was Chris Catchpole, with Pilkington, Lachlan Robertson, Josh Thompson and Lance Dawson rounding out the top ten.

Despite not being amongst the nominated entries, Liam Williams found himself with a favourable draw in the Formula 500 heats, which he put to good effect in securing pole position for the feature race. After winning the first preliminary, Williams finished third behind Kaydon Iverson and Kurt Wilson in the second heat. Leading all 15 laps of the feature race, Williams found his mission made somewhat easier when the pursuing pair of Iverson and James Kennedy crashed themselves out in the back straight on lap eight. Wilson would ultimately finish second, more than five seconds behind Williams, with Brady Argles, Kacy Lee Black and Ryan Potts completing the first five, followed home by Brock Thornton, Adrian Farrell, Kinser Claridge, Royce Harvey and Jake Hooper.

The next meeting at Archerfield Speedway is October 16 featuring round two of the East Coast Logistics Sprintcar Track Championship and the Sprintcar Development Series, along with AMCA Nationals, Compact Speedcars, Modlites and RSA Sedans.