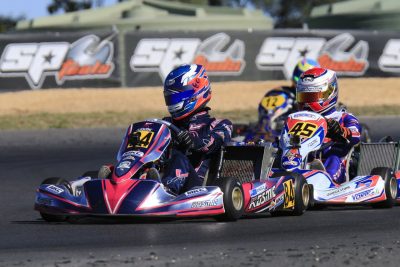 Automotive and industrial tool manufacturer SP Tools has expanded its partnership with Karting Australia to incorporate the Australian Kart Championship.

The Australian-owned and operated company will become the title sponsor of the five-round Championship in a multi-year arrangement.

“We’re delighted to be able to further expand our partnership with Karting Australia and become the title sponsor for the Australian Kart Championship,” said SP Tools Managing Director Kevin Davis.

“Since beginning our partnership with Karting Australia three years ago, with a focus on the Junior Sprockets program, we’ve been seriously impressed with the benefits the sport has provided the SP Tools brand.

“Our partnership with Karting Australia is an integral part of our marketing platform, and I’m looking forward to taking this to another level with the Australian Kart Championship.”

“SP Tools is there to help people enter karting and we are proud to be there with Australia’s karters as they develop in the sport and test themselves at the top level.”

For Karting Australia Chairman Mick Doohan, the expanded partnership by the market leading tool company is testament to the high level of respect that the Championship and karting generally has earned within the motorsport industry.

“Over the past few years the Australian Kart Championship has developed into a very significant competition on the Australian motorsport scene – both from a talent and commercial perspective. We’re thrilled that Kevin and the team at SP Tools have recognised this, and have expanded their partnership with Karting Australia,” said Doohan.

“SP Tools have been a great partner from day one and has been an integral part of our Junior Sprockets program over the past couple of years. We’re excited about having them on board as the naming rights sponsor for the Australian Kart Championship.”

The opening round of the SP Tools Australian Kart Championship, presented by Castrol EDGE, will be contested at the Monarto Karting Complex in South Australia on February 23-25. It is expected that more than 250 drivers from all States of Australia, New Zealand, Singapore and America will take to the circuit across nine classes.

Proudly Australian-owned and operating since 1987, SP Tools has been a Market Leader for more than 25 years in Automotive & Industrial Tools, Powered Equipment, small engines and Compressors. The quality brands – SP AIR, SP Hand Tools and Torini Engines, provide a huge range of products that cover all aspects of industry from automotive through to trade, and up to heavy industries.

SP Tools has more than 1000 outlets Australia wide and is available in more than 30 Countries.

Previous Story Costs down for ARC competitors in 2018