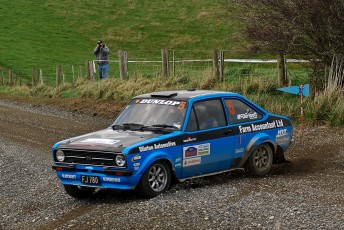 The first round of the 2014 Laird Motorsport & Models Southern Rally Series takes place in conjunction with the DriveSouth Rally Of Otago this weekend.
Originally for drivers and co-drivers with a residential address from the Waitaki River south, the boundaries were extended in 2012 and now drivers and co-drivers who are members of a Motorsport New Zealand Car Club from and including South Canterbury south and who have a residential address in South Canterbury, Otago or Southland can contest the series.
The traditional opener is the Rally Of Otago which will be followed by the second round, the Catlins Coast Rally on 9 August while the final round is the Gore Clubmans Rally on 11 October. As well as an overall title for the top driver and co-driver the series also has class championships for drivers and co-drivers in Class A (0-1300cc), Class B (1301-1600cc), Class C (1601cc & over) plus Class D (4wd vehicles).
Last year saw a monumental result when Derek Ayson of Gore became the first 2-wheel-drive competitor in the history of the series to take overall honours in his Nissan powered Ford Escort. It was the third time Ayson had picked up the series title but the previous two times had been in 4-wheel-drive machinery. “I was absolutely stoked to win it in a 2-wheel-drive car,” says Ayson. “I’d love to do it again but it’s unlikely,” he laughs. However he quickly adds that the rapid Escort is “the best it’s ever gone!” With other former champions Andrew Graves and Dean Bond not driving at Otago Ayson says Carter Strang of Wallacetown and Jim McDonald of Gore will be tough series rivals in their EVO’s.
While Ayson returns to defend the overall and Class C drivers title other defending champions lining up in Otago are Rhys Gardner of Balclutha in Class D and Peter Fridd of Oamaru in Class A. Two of last year’s co-driver class winners, Cherie Fridd and Heather Johnston are also in the field this weekend.
The expanded eligibility rules sees some of New Zealand’s very best part of the series for Otago at least with Chris West of Timaru and Emma Gilmour of Dunedin part of the competition as well as former World Production Rally Champion Hayden Paddon.
The DriveSouth Rally Of Otago commences with a ceremonial start in the Octagon on Friday evening. Competition follows on both Saturday and Sundaybefore the ceremonial finish at the Dunedin Railway Station on Sunday afternoon.