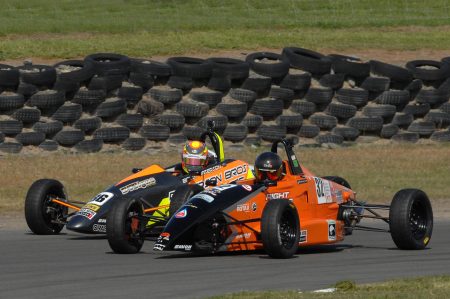 Auckland’s Josh Bethune has a narrow lead heading into the third round of the South Island Formula 1600 Championship in Invercargill this weekend. While Bethune may have set the pace in the opening two rounds, it has not been straight forward with a group of rivals all determined to be at the front.

Leading the charge and in second overall is Jordan Michels who will be competing on his home track at Teretonga Park. Michels has two wins to Bethune’s three with Christchurch’s Bailey Paterson a win as well, also a contender.

Aiming for his first race win is rookie driver James Penrose who has finished on the podium in four out of six races.

This season is proving to be one of the most competitive for some time with grids seeing well over 20 cars.

“We currently have a fight with four to five drivers, by the end of the season there will be ten,” commented Michels. “This year will be one of the toughest!”

Within the category there are three classes competing for titles.

Bethune leads Class 1 from Michels and Stichbury while Penrose leads Class 2 from Paterson and Jack Noble-Adams. The very competitive Class 3 is led by Gary Love from Noel Atley and Andy Downs.