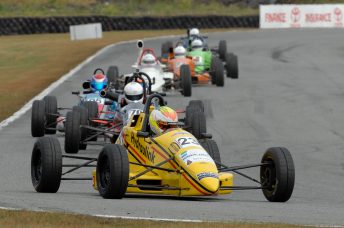 The 2017/18 South Island Formula 1600 Championship gets underway at the Mike Pero Motorsport Park this weekend with over 20 single seaters expected to take the grid. With last season’s champion Michael Collins moving to F5000s, the title is wide open for others to step up and claim. Experienced campaigners and a new flock of young drivers will mean a very competitive season across three different competing classes as well as the overall driver title.

Jordan Michels from Southland finished runner up to Collins last season and is back in his 2013 Mygale SJ13 car. In the late autumn, he had the opportunity to test a similar car with Mygale Australia at the Winton Raceway in Victoria. He also comes off the back of competing in the South Island Endurance Series driving a BMW with Eddie Bell so has had some good track time leading into the start of the single seater season.

Third home behind Michels was fellow Southlander Ethan Anderson. Anderson run a decent campaign last season finishing on the podium seven times but two dnfs at the last round dropped him behind Michels.

Stepping up from kartsport this season will be Nelson’s Matt Butchart. Butchart is the first recipient of the South Island Formula 1600 scholarship which sees him provided with a 1988 Van Diemen from Garry Love, enabling him to compete in the Historic Class 3. The arrangement is that the car is provided free of charge but Butchart and his team must look after all the racing expenses. The scholarship has been provided to help young drivers into the category.

Bailey Patterson also steps up from kartsport and is the current South Island and national Mini 7 champion. He will be campaigning in the ex Dave Arrowsmith R94 Van Diemen Stealth in Class 1.

Kurt Peterson makes a welcome return after being out of the sport for nine years. With the potential for his RF93 Stealth becoming a ‘barn-find’, Peterson has now dusted the car off and is expected to be at the sharp end of the field. Also returning is Steve Edwards in the very well presented and competitive Mygale SJ 8a.

Trevor Stiles has returned from the UK for his fourth NZ summer and this time has brought his son Ben who will drive the Stealth that Trevor campaigned last year. With a background in UK kartsport, Ben will make his debut into both single seater and NZ circuit racing.

Another Mygale Class 1 car will be driven by Josh Bethune. The ex Aaron Marr 2017 model will be very quick although having only raced it once at Timaru last year, Bethune can still be regarded as a rookie driver.

Also in Class 1 will be Jack Noble-Adams (1991 Stealth). This will be the teenagers second season having competed in both the SIF1600 and national series last summer. Simon Spencer-Bower will compete in his ex Ryan Yardley 1993 Van Diemen Stealth. Spencer-Bowe is a helicopter pilot/trainer and has clocked up more hours flying Robinson helicopters than anyone else in the world. Also retuning is the Steve Hefferman (1994 Stealth) who finished fifth last season and is always making the ‘young guns’ earn their results. Tony Fitzpatrick from Epsom will also drive a 94 Stealth in Class 1.

With Collins not competing in Class 2, this allows seasoned campaigners Derek Wilson (92 Swift), Dyson Freeman (RF92 Van Diemen), Robert Toshach (1998 Spectrum) and Philip Butcher (RF92 Van Diemen) to fight for the title along with Noel Atley in a 1991 Swift.

Andy Downs (1983 Lola 642E) is the current Class 3 national champion but this season will have his hands full with Joseph Oliver returning for his third season (1984 Crossle 55F) and current SIF1600 title winner Roger McKenzie (1972 ) Begg FM3 expected to again be competitive.

Drivers’ and teams face six rounds of competition with a number also expected to compete in the national championship. Three of the SIF1600 rounds also double as NZ Formula 1600 rounds with two more North Island events in February.