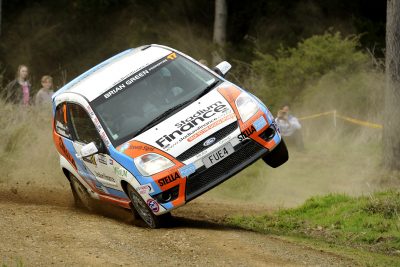 Thanks to the long-time supporters Stadium Finance and Stadium Cars, Holder and co-driver Jason Farmer, of Mt Maunganui and Hamilton respectively, will pilot a left-hand-drive, front-wheel-drive Ford Fiesta in the 23 June Rally of South Canterbury.

The Timaru-based event is the fourth round of the Brian Green Property Group New Zealand Rally Championship, but the domestic competition isn’t on Holder’s radar – in fact, he’s not even entered in the NZRC category. Holder’s focus is solely on his ongoing development of skills needed to compete internationally.

“The key focus for us this weekend is pace notes,” says Holder. “Given that it’s only a one pass recce on roads I’ve never seen, writing notes from scratch will be difficult for my experience level. Jason and I have definitely made improvements in this area over the last few events, but you can never stop learning in this sport – especially when you are trying to build an international career. We will need to manage our pace in South Canterbury accordingly. We’re also interested to see how much information I can get into the notes on just one pass – it’s the first time we’ve done this rally so it’s an excellent opportunity to develop these skills. Being competitive in the overall results is certainly the last thing on our minds as we think of the big picture.”

The Stadium Finance Ford Fiesta ST is similar to the R2 the pair used at the International Rally of Whangarei, being a low powered FWD car with good handling.

“I can also further practice the left foot braking technique I’ve been working on recently and the Fiesta being left-hand-drive is always good for practise too. It’s nice to have the chance to compete in New Zealand amongst many competitors we know so well and continue to develop in a low pressure, relatively relaxed scenario.”

Holder adds: “I really want to thank Stadium Finance and Stadium Cars for the opportunity. They’ve been long-time supporters of ours, so it’s great to continue the relationship.”

Holder has been working hard towards making the next JWRC event, Rally Finland in late July, possible in terms of the finances involved.

“There are still a few hurdles to go with payment for the event due next week. But once we tick that box, it will be time to get into some specific prep for the event. This rally is an important opportunity to grab some seat time to get match-fit for Finland. It sounds like quite a fast rally in terms of road nature so will be perfect preparation for those famous high speed Finnish stages.

“We always knew this journey would be a tough one, and it hasn’t disappointed! We’re working our hardest to find every opportunity to help fund the campaign as well as continued personal development, that’s why it’s so fantastic Stadium Finance have provided the opportunity to grab some seat time.”

Holder and Farmer are seeded 33rd in a 96-strong field which will tackle around 190 kilometres of competition, broken into 11 stages to the northwest and southwest of Timaru. The action gets underway around 7.30am on Saturday and wraps up mid afternoon with a few laps around the Levels Raceway for all rally competitors.