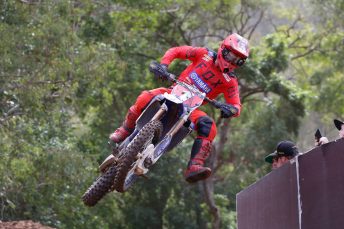 South Australian dirt bike fans are counting down the days to their annual dose of high-flying off-road motorcycle action, when round three of the 2017 Australian Supercross Championship invades Adelaide Motorsport Park at Virginia, on Saturday, October 28.

Hundreds of tonnes of top soil will be trucked into the Virginia venue, to then be sculpted into a man-made torture track featuring double and triple jumps, rhythm lanes, berms and whoops that will truly test a capacity field of Australian and international supercross stars.

“All the pieces are coming together to ensure South Australian supercross fans will enjoy a world-class motorsport spectacle at round three of the 2017 Australian Supercross Championship at Adelaide Motorsport Park,” enthuses event promoter Mark Gilbert.

“The track plans look spectacular and red-hot fields of Australian and international riders are expected for the premier SX1 (450cc) and SX2 (250cc) categories, while we are excited to welcome Junior riders in the SX Junior Lites and SX Junior 85 classes, which this year have been granted championship status by Motorcycling Australia to foster the next generation of supercross champions.

“Event festivities will include an afternoon Pit Party where fans can meet all their favourite riders and get a close-up look at the bikes and race team transporters, while a spectacular fireworks display will boost the evening’s on-track action.”

Last year’s Adelaide round of the Australian Supercross Championship was a stand-out, with American Honda invader Justin Brayton taking the win in the SX1 final – on his way to ultimately winning the championship – and American-based Aussie Hayden Mellross winning the SX2 final. Both finals had South Australian race fans up on their feet and cheering.

Headlining the Australian rider line-up in the SX1 category of this year’s six-round, four-state championship is 2015 Australian SX1 champion Dan Reardon, who is returning home to Australia from the USA to join the Mega Fuels Monster Energy Kawasaki Racing team.

After coming out of retirement to win the championship in spectacular fashion in 2015, Reardon’s 2016 supercross hopes were dashed by a knee injury. Now back to full fitness after contesting this year’s AMA 250cc Western Region Supercross Series, Reardon hopes his return to Team Green rekindles the form that saw him win multiple state and national titles with the brand in the late 2000s before he made a full-time move to the USA.

“I made a comeback in 2015 and won a championship first year back,” Reardon explains. “Unfortunately last year I had a major knee injury and once that was fixed I went to America. Now I’m back and I can’t wait to get some serious seat time on the Mega Fuels Monster Energy Kawasaki Racing Team KX450F. Dominance is what I want and that’s what I think the team, myself and the KX450F are capable of.”

Ready and waiting for Reardon’s return is 2016 Australian SX1 championship #2 and reigning MX Nationals champion, CDR Yamaha’s Dean Ferris, who is in red-hot form as the tear-away leader of this year’s MX Nationals title chase. Recognised as an outdoor motocross exponent, Ferris was the revelation of the 2016 SX1 championship, charging to a strong second overall in the series behind American Brayton. Ferris, backed by Aussie dirt bike legend Craig Dack’s Yamaha race team, will be aiming to go one better this year.

Advance purchase tickets to the South Australian round of the 2017 Australian Supercross Championship are on-sale now via the www.ticketbooth.com.au website, with special family pass packages available (for 2 adults and 2 children, or 2 adults and 3 children), while all children under 5 accompanied by an adult will be admitted free. Tickets will also be available at the gate on the night.

For all further event information and latest news updates, be sure to regularly check out the www.gilbertracing.com.au website.