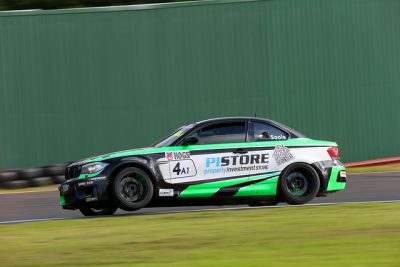 After taking advantage of the experience of a Supercars driver at the opening round of the 2018 Jacuzzi Spas Australian Production Cars season, Anthony Soole will reunite with regular co-driver Andrew ‘Fishtail’ Fisher in the #4 Property Investment Store BMW 1M for this weekend’s round two at Queensland Raceway (July 27-29).

“Our Sandown round was an okay round for us – we were lucky enough to have Aaron Russell co-driving with us and he really dug deep for us. We came away feeling that we were the best of the rest in our class, being that it was a high horsepower track we did struggle in a straight line compared to our competitors but that was to be expected,” said Soole, whose entry is supported on-track by Jesus Racing, the Life Choices Foundation and Property Investment Store​.

“The QR track is another high horsepower circuit, so we will again probably struggle a bit when it comes to straight-line speed, but having run in many 300km races we know strategy plays a huge part and this is where we feel we might gain a little over the other teams.

“Experienced racer Andrew ‘Fishtail’ Fisher will be co-driving with us again and he has many laps of QR under his belt, so that should help us be on the pace pretty quickly even though it has been a while since I took to ‘The Paperclip.’ Andrew and I first drove together at the Daewoo 500 at Wakefield Park back in 2001, so we have had quite a bit of running time together over the years.

“When it comes to the night racing, this will be new ground for me and I am looking forward to the challenge of my first race under lights. It will be good practice if I ever get the call-up to run in the 24 hours of Le Mans!” laughed Soole.

“It would certainly be nice to be on the podium – we were able to take out fourth and third place at the two x 300km races at Wakefield Park (the last round of the 2017 season) so hopefully we can get ourselves back there at QR!

“After the racing is over, Andrew will be staying on in Queensland as part of his Life Choice Program that he runs with local schools and jails – he is lucky enough to speak with around 30,000 kids and young adults a year, challenging them to think about choices they make and will make in their lives. Hopefully we can have a good results for him to report on too!”

Round two of the 2018 Jacuzzi Spas Australian Production Cars will be held at Queensland Raceway across July 27-29, with two 300km races to be held over the weekend, including the infamous ‘Fight in the Night’ on Saturday evening.